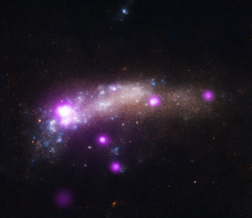 
For some reason, a small subset of supernovae (the cataclysmic explosion of an evolved star) seems to be about ten times brighter than normal. Such was the case for an explosion detected at earth in 2010, which occurred in a distant irregular galaxy called UCG 5189A. This supernova, dubbed SN 2010jl, was about 10 times more luminous that your typical massive star core-collapse supernova. The unusual class of super-bright supernovae (if it really is a class) has been a puzzle to astronomers, and has raised uncomfortable questions about our understanding of the process by which a massive star dies. Three explanations have been presented: that these superluminous supernovae represent the formation of a strange neutron star with a super magnetic field; or that these stars are so massive they produce a weird "pair-instability" supernova; or these superluminous explosions occur in unusually dense circumstellar cocoons, which produces an enhanced interaction with the supernova blast wave. The image above of UCG 5189A is a composite of X-ray observations by the Chandra X-ray Observatory (purple) and an optical image by the Hubble Space Telescope (in red, green, and blue). SN 2010jl is the bright white source on the left side of the image. Two Chandra X-ray observations of SN 2010jl in December 2010 and October 2011, were, literally, quite revealing. The later Chandra X-ray observations showed a dramatic decrease in the amount of X-ray absorption suffered by the supernova. This is the first time that a supernova breakout from its circumstellar cocoon was seen in "real time" (if you can call observing an event that actually occurred 160 million years ago "real time") and provides evidence that the blast-wave/thick circumstellar cocoon hypothesis as the source of these superluminous supernovae.