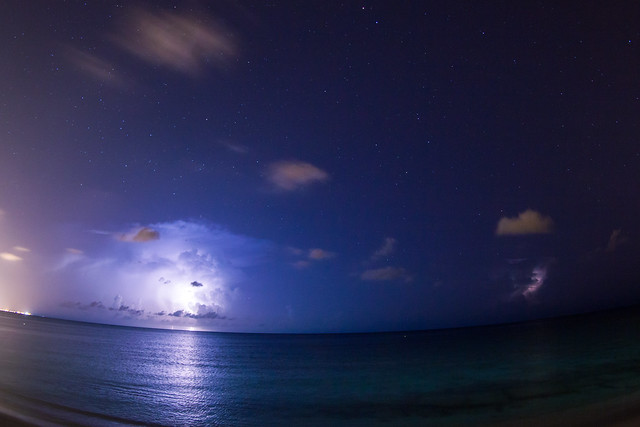 Storm Over the Caribbean by Radical Retinoscopy, on Flickr

A distant summer storm is seen in the Caribbean Sea off the coast of Grand Cayman Island. Three distinct lightning strikes can be seen reaching the sea from the left thunderhead. It was amazing to capture such a vivid display in a single twenty second exposure. The photo was taken with a Canon T2i and a Canon 8-15 mm f/4L lens at (f/4.0., 13 mm, ISO 400).
Top

Higher res @
http://westcoastpics23.blogspot.com.au/
You do not have the required permissions to view the files attached to this post.
Top

When the night falls ,Stars and nebula of the autumn nights rise above TianHaiZi Mountain(ASL 6070M).Imaged with a modified Sony a7.The two bright stars in the Auriga between the Taurus with California Nebula and Pleiades star cluster show the beautiful scene.
Top Rosette Nebula in Monoceros from Buenos Aires by Omar Mangini Image information and equipment on my website below.
http://matthewdieterich.zenfolio.com/p2 ... #h2d1a0f3b

http://cdn.astrobin.com/images/thumbs/3 ... 0Woods.jpg
Woods.jpg
NGC 1365, also known as the Great Barred Spiral Galaxy, is a barred spiral galaxy about 56 million light-years away in the Southern Hemisphere constellation Fornax. The core is an oval shape with an apparent size of about the same apparent size as the full moon. The spiral arms extend in a wide curve north and south from the ends of the east-west bar and form an almost ring like Z-shaped halo.

In February 2013, observations using the NuSTAR satellite have found out that the central supermassive black hole of NGC 1365, measured to be about 2 million solar masses in mass, is spinning at almost the speed of light.

Hundreds of galaxies litter the background of this image. No noise reduction was performed in order to maintain these faint fuzzies.

Permission granted to re-post with credit attribution
You do not have the required permissions to view the files attached to this post.
Last edited by owlice on Fri Dec 05, 2014 8:59 am, edited 1 time in total.
Reason: Attached smaller image for faster downloading; left link to larger image. Please keep hotlinked images under 400K. Thanks for sharing!
Top

A 2 panel mosaic focused in an area near M45 cluster. 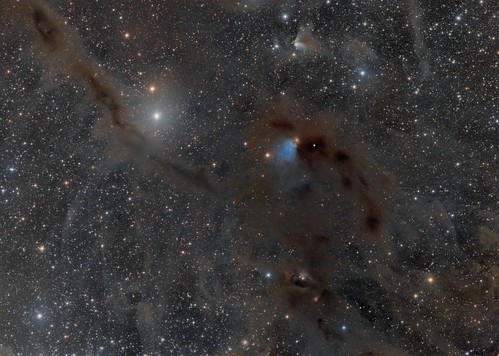 First submission here! Please let me know if any other info is required. This is a 26 panel mosaic of the Moon. Taken with a Celestron C6 telescope and Canon T4i DSLR. Each of the 26 panels was stacked from a 700 frame AVI using the 10% (70) best frames.
Top

Rochester Panel
http://www.ancientskys.com
Copyright: Marc Toso
http://www.ancientskys.com/Anasazi-ruin ... 3_1-X3.jpg
Rochester Panel 3_1-X3.jpg
Extensive petroglyph panel in the San Rafael Swell outside of Emery Utah. There are at least a hundred petroglyphs on this panel, mostly Fremont in origin. This is one exposure with the winter Milky Way in the background, the rocks were illuminated with a flashlight for a few seconds. I find the most interesting feature is the arch in the middle reminiscent of a rainbow or perhaps our Milky Way Galaxy.

View in full size to fully appreciate the extensiveness of this panel
You do not have the required permissions to view the files attached to this post.
Last edited by owlice on Fri Dec 05, 2014 9:03 am, edited 1 time in total.
Reason: Attached smaller image for faster downloading; left link to larger image. Please keep hotlinked images under 400K. Thanks for sharing!
Top

I call this Peek-A-Boo moon because at the bottom you can see the tip tops of some mountains and crater rims "peeking" up out of the darkness from beyond the terminator where the sunlight is just grazing their tops. I was also very happy with how well the subtle color variations came out in the maria, and in the ray systems.

Copyright: Richard S. Wright Jr.
http://www.eveningshow.com
You do not have the required permissions to view the files attached to this post.
Top 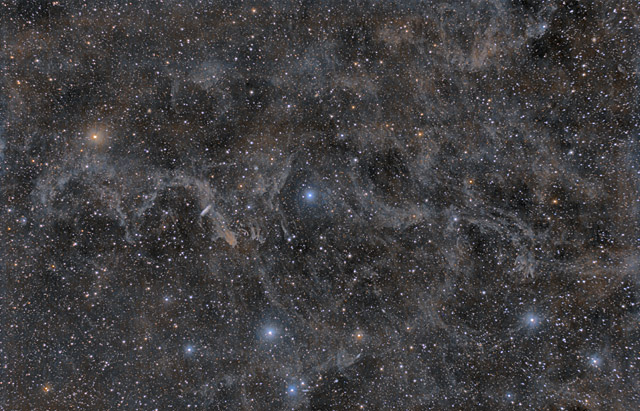 MBM 54 is a faint molecular cloud located about 900 light years from our solar system in the outer regions of our galaxy. These types of clouds are found at high galactic latitudes (parts of the sky away from the plane of our Milky Way Galaxy) and are often referred to as galactic cirrus clouds or more commonly the "Integrated Flux Nebula". These clouds are very faint and quite tricky to photograph. The IFN was first discovered in 1984 by the IRAS infrared satellite. In 1985, astronomers Magnani, Blitz and Mundy surveyed the IFN and developed their MBM catalog of 56 high galactic latitude molecular clouds. MBM 54 is one of the closer of these IFN clouds.

Also shown in this image are numerous background galaxies including the prominent edge on spiral galaxy NGC 7497 (just left of the center of the image). At a distance of 59 million light years, this galaxy is over 60,000 times farther from us than the foreground MBM 54 clouds.

Not so impressive as M11, however M26 is a very nice Open Cluster lying in a crowded starfield in Scutum.
Taken from Argentine Pampas 110 km north of Buenos Aires, three new Moons ago...

Cheers from the South!!
Sergio
You do not have the required permissions to view the files attached to this post.
Top

Hidden Gems of the Cone Nebula

Presented below is an optical image of the Cone Nebula by Chuck Manges with a hoverable infrared image from NASA's WISE mission processed by myself. Many hidden stars are revealed by infrared observation and it is fun to swap back and forth between the two and find the hidden gems shrouded completely by dust. For more information on the optical image of the Cone Nebula by Chuck Manges, click here.

For more information and a widefield view of the WISE image, see here. An uncropped thumbnail view is also below.

I’d like to share my narrowband image of Messier 16, the Eagle Nebula. I do most of my astrophotography from under the light dome of Melbourne, Australia. My observatory is located about 15 km from the CBD, and is situated in a red zone classification of light polluted skies. As a result, I tend to image in narrowband in an effort to cut through the murky skies above.

The scope used to acquire this image was a 10 inch RCOS f/9 Ritchey-Chrétien, using a SBIG STL-11000m camera, riding on an Astro-Physics AP900 Mount. 18 X 600 second subs were used to create the image.

Terry
You do not have the required permissions to view the files attached to this post.
Collecting Photons.....

There is a widefield image of the Cone Nebula region that reveals the optical counterpart of the strange structure in the lower right corner of the WISE image. Rolf Geissinger's widefield optical image is here.

Thanks, Ann. I did check for optical pictures of that area too just to see how it looked but it doesn't seem to have a common name and I'm not sure what the red glow from the infrared image is. The optical counterpart actually only vaguely resembles the infrared view once the two are overlaid to compare them. Looking at the two gives me an impression of its cavernous dimensionality.
Just call me "geck" because "zilla" is like a last name.
Top

This is a 360 pano, with moonlight and airglow.

https://www.flickr.com/photos/m_acubens/
You do not have the required permissions to view the files attached to this post.
Sergio Emilio Montúfar Codoñer
pinceladasnocturnas.com
Top
172 posts