A Dark Sand Dune on Mars

Explanation: What is that dark sand dune doing on Mars? NASA's robotic rover Curiosity has been studying it to find out, making this the first-ever up-close investigation of an active sane dune on another world. Named Namib Dune, the dark sand mound stands about 4 meters tall and, along with the other Bagnold Dunes, is located on the northwestern flank of Mount Sharp. The featured image was taken last month and horizontally compressed here for comprehensibility. Wind is causing the dune to advance about one meter a year across the light bedrock underneath, and wind-blown sand is visible on the left. Part of the Curiosity rover itself is visible on the lower right. Just in the past few days, Curiosity scooped up some of the dark sand for a detailed analysis. After further exploration of the Bagnold Dunes, Curiosity is scheduled to continue its trek up the 5-kilometer tall Mount Sharp, the central peak in the large crater where the car-sized rover landed.

Getting really good returns on investment with this vehicle. Be carefull with sand monsters
Wolf Kotenberg
Top

This picture is far easier to comprehend when you click on it for the wide screen version.
Why it was "horizontally compressed here for comprehensibility" is beyond me - we've had lots of wide screen APODs in the past.

I presume that Curio is looking at it from 'upwind', in the direction the dune is going?
Why are there 'tails' to the sides, that look as if they are remnants of a passed-over dune, but cannot be so as they are present both ways.
And is there some defile behind Curio to channel any wind and cause this dune?

ta152h0 wrote:Getting really good returns on investment with this vehicle. Be carefull with sand monsters

I was wondering if it was a Martian Sand Monster too... "to seek out new life forms"....etc....Hey, they had a Silicon based life form on Star Trek...the Rock Mother...remember...it could happen. Don't step on the sand!!!!

Interesting image...and I wonder why it is dark...or is it just "darker" than the other sand, but there sure seems to be a LUMP of it all together in one place...makes one wonder...why is it not integrated with other lighter sand???? Hmmm???
Maybe Density? The lighter colored, and lighter mass sand was blown clear? So you just have the darker? In that case...Where is the Lighter Sand Monster????


One assumes then all other dunes on all other worlds are insane..... isn't that unlikely?
Top

My curiosity was satisfied by sand in the past.

Ant Farm.jpg
You do not have the required permissions to view the files attached to this post.
Make Mars not Wars
Top

I would have expected a smoother surface on the face of a sand dune. There seems to be a lot of structure and definition to it. Any idea what the angle of repose would be on Mars? I am assuming that both could be related to the lack of weathering to smooth the sand grains.

Also, note the slab of rock to the right of the rover. There are lighter 'channels' that appear on the surface of the rock that do not look like 'shatter effects'. The rock appears to be sedimentary in nature, as shown be the small outcrop of rock just above it. But the 'channels' appear very similar to the trails left by worms, snails, etc that you would find on any of the mud flats in the tidal zones on earth. Also, you can see where one of these channels appears to descend vertically thru the sediments (look at the little outcrop), something typical of creatures that bury themselves in sediments. Makes me wonder if anyone thought to get a closeup of that before moving on.
Top

Guest wrote:
I would have expected a smoother surface on the face of a sand dune.

There seems to be a lot of structure and definition to it.

<<Oasis in Antarctica; a sand dune in Lower Victoria Valley, one of the Dry Valleys of Victoria Land, with the Packard Glacier in the background. The dune is migrating from east to west, and climbing over a moraine ridge, driven by winds blowing inland from the Ross Sea during the Austral summer. See “Is climate change affecting rates of dune migration in Antarctica?” by Bristow et al., p. 831–834.>> 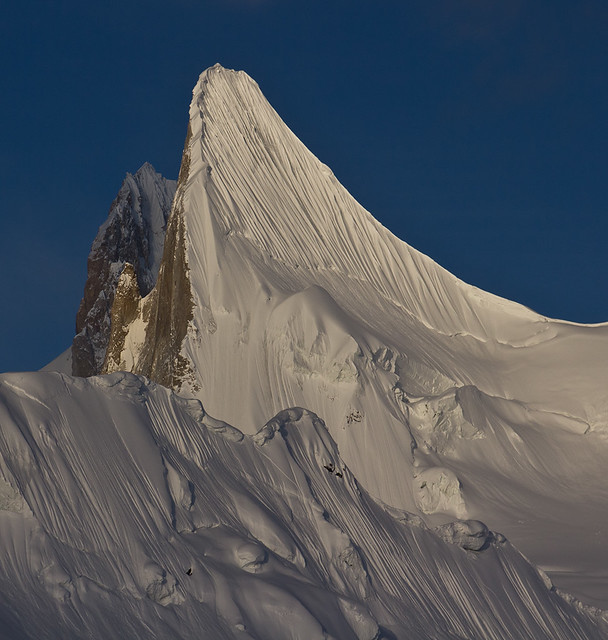 Tremendous image of a Martian dune!

Although: I recognize those mountains in the left top background, right outside Twentynine Palms, where I grew up.

I was particularly intrigued by the footprint in the lower left corner of the image.

Just kidding of course, I'm assuming it's from Curiosity's wheel in a patch of sand large enough for it to make an imprint (where the surrounding rock prevented it).
Top

Tongue-in-cheek wrote:
I was particularly intrigued by the footprint in the lower left corner of the image.

I was exceedingly surprised with the print of a man's naked foot on the shore, which was very plain to be seen on the sand. I stood like one thunderstruck, or as if I had seen an apparition. I listened, I looked round me, but I could hear nothing, nor see anything; I went up to a rising ground to look farther; I went up the shore and down the shore, but it was all one; I could see no other impression but that one. I went to it again to see if there were any more, and to observe if it might not be my fancy; but there was no room for that, for there was exactly the print of a foot - toes, heel, and every part of a foot. How it came thither I knew not, nor could I in the least imagine; but after innumerable fluttering thoughts, like a man perfectly confused and out of myself, I came home to my fortification, not feeling, as we say, the ground I went on, but terrified to the last degree, looking behind me at every two or three steps, mistaking every bush and tree, and fancying every stump at a distance to be a man. Nor is it possible to describe how many various shapes my affrighted imagination represented things to me in, how many wild ideas were found every moment in my fancy, and what strange, unaccountable whimsies came into my thoughts by the way.

"This film is Scientifically Authentic ...

It is only one step ahead of present reality!"

Ron,
I thought that Crusoe on Mars was pretty good, for the time! It looked a lot less Flash Gordon than I expected!
And then ... he opens his visor. On Mars. Even then, surely, they knew not to?

JohnD wrote:
I thought that Crusoe on Mars was pretty good, for the time! It looked a lot less Flash Gordon than I expected!
And then ... he opens his visor. On Mars. Even then, surely, they knew not to?

Easy, John. Mona was played by a male Woolly Monkey named "Barney",
who had to wear a fur-covered diaper to conceal that fact.

This was a year or two before 1965 when the first spacecraft reconnaissance of Mars took place. Scientists back then only estimated that the Oxygen pressure on Mars had to be less than 21 millibars ... or about half the Oxygen necessary to keep from blacking out. (We now know that Oxygen pressure on the Martian surface averages just ~9 microbars.)

1862: about 11.887 km (Oxygen pressure = 41 millibars)—Henry Coxwell and James Glaisher in a coal-gas balloon. Glaisher lost consciousness during the ascent due to the low air pressure and cold temperature.

http://www.uapress.arizona.edu/onlinebks/MARS/CHAP10.HTM wrote:
The Planet Mars: A History of Observation and Discovery
William Sheehan

<<G. P. Kuiper... who had hitherto embraced the vegetation hypothesis, changed his mind within the year, in large part because of the impression made on him by the great dust storm of 1956. The obvious ability of winds to move dust on Mars led him to propose that the dark areas might be dust-covered lava fields. As McLaughlin had in his original theory, Kuiper invoked seasonal removal of the dust by wind currents to explain the "wave of darkening." In 1958, a Russian astronomer named V. V. Sharanov arrived independently at the same explanation. The air currents on Mars, he wrote, "vary from season to season, depositing dust at some times of the year and blowing it away at other times. Thus, for instance, the inherently dark surface . . . may brighten at a definite time of the year as a result of settling of light-colored dust blown over from the desert areas."

Lowell had argued that the dark areas were dry sea bottoms, but radar studies in the early 1960s indicated that at least some of them were elevated rather than low-lying areas. This, incidentally, destroyed yet another argument once regarded as compelling support of the vegetation theory. In 1950, E. J. Opik had pointed out that if the dark areas were low, they ought to be quickly covered by yellowish dust unless they had some means of regenerating themselves. At the time this was thought to prove that they were tracts of vegetation. If, however, the dark expanses were actually elevated areas, there was no need to believe this---the dust might just as well be removed by wind scouring.

The century-long quest for Martian water vapor finally came to fruition at the mid-winter opposition of 1963. The detection of very minute amounts of water vapor in the Martian atmosphere was announced by Audouin Dollfus, who set up a special telescope at the Jungfraujoch high in the Swiss Alps, and by H. Spinrad, G. Munch, and L. D. Kaplan, who used a photographic emulsion especially sensitive to infrared radiation to record the spectrum of Mars near quadrature with the 100-inch reflector at Mount Wilson. The latter team found that the average amount of precipitable water on Mars (that is, the equivalent thickness of liquid water if all the atmospheric water were to be condensed onto the surface) was only about 14 micrometers, compared with 1,000 micrometers of precipitable water in even the driest desert areas of Earth. In addition, they estimated that the partial pressure of carbon dioxide on Mars was 4.2 millibars and that the total atmospheric pressure at the surface could not be more than about 25 millibars. This was a drastic downward revision from the previously accepted figure of 85 millibars. Thus, Mars was drier and had an even thinner atmosphere than anyone had realized.

Parenthetically, the reason so many of the earlier investigators were so far wrong about the thickness of the Martian atmosphere was that most based their estimates on albedo studies. They had assumed the Martian atmosphere to be usually clear and transparent, but this is not the case; often there is at least some dust present, which makes the atmosphere more reflective than they had supposed.

By the time Spinrad, Munch, and Kaplan published the results of their monumental study, a very different view of Mars was beginning to come into focus. In many ways this new Mars resembled the modern view of the planet: a bone-dry world with an extremely rarefied atmosphere, a surface with perhaps considerable relief, and changes in its markings that were the result of windblown dust rather than vegetation. However, the paradigm shift was not yet complete by 1965 when the first spacecraft reconnaissance of Mars took place, and most astronomers and the lay public were shocked, even depressed, by what it revealed.>>

Somebody has a sense of humor. I clicked on "Horizontally Compressed," expecting to see the picture in normal aspect ratio. But I was dogged by bad luck.