Close Comet and the Milky Way

Explanation: Comet 252P/Linear's lovely greenish coma is easy to spot in this expansive southern skyscape. Visible to the naked eye from the dark site near Flinders, Victoria, Australia, the comet appears tailless. Still, its surprisingly bright coma spans about 1 degree, posed here below the nebulae, stars, and dark rifts of the Milky Way. The five panels used in the wide-field mosaic were captured after moonset and before morning twilight on March 21. That was less than 24 hours from the comet's closest approach, a mere 5.3 million kilometers from our fair planet. Sweeping quickly across the sky because it is so close to Earth, the comet should be spotted in the coming days by northern hemisphere comet watchers. In predawn but moonlit skies it will move through Sagittarius and Scorpius seen toward the southern horizon. That's near the triangle formed by bright, yellowish, Mars, Saturn, and Antares at the upper left of this frame.

This is a wonderful portrait of objects near and far.

The most nearby object is the comet, whose turquoise color is different from anything else in this cosmic panorama, and it is lovely to behold. The comet was only 5.3 million kilometers away when this picture was taken, which means its distance from the Earth was only about 1/28th of the distance between the Earth and the Sun.

The second most nearby object in the APOD is Mars, which is seen in the upper left corner of the image to the upper left of bright star Antares. It is fun that Mars and Antares should be so apparently close to one another, because the star Antares is actually named after planet Mars. "Mars" is the Roman name of the Greek god of war Ares, and the name of the star is actually Ant-Ares: Rival of Mars. Both the planet and the star are so reddish in color.

According to my software, the distance between Mars and the Earth right now is about 0.848 AU, about 127 million kilometers, which means that Mars is closer to us than the Sun right now. It isn't always that way: sometimes Mars is on the far side of the Sun in its orbit around the center of the solar system.

And Antares? According to my software, its distance from the solar system is about 550 light years.

But we must return to the solar system. The third most nearby object in the APOD is Saturn, currently at a distance of 9.66 AU, which is to say that Saturn is about 9.66 times farther away from the Earth than the Earth is from the Sun. The current distance to Saturn, according to my software, is 1,444,744,087 kilometers from the Earth.

But I doubt that today's APOD is deep enough to resolve Proxima Centauri's faint 11th magnitude glow among the myriad of stars seen in the edge-on disk of the Milky Way. So we may look at the next best thing, white Sun-like binary star Alpha Centauri, which has been nicely labeled in the annotated version of today's APOD. Alpha Centauri is 4.32 light-years away.

Instead of determining the distance to other individual stars, let's look at all the scattered blue stars that appear to "float" above the the disk of the Milky Way all the way from left to right in the upper part of the APOD. These stars belong to the Sco-Cen association of OB stars, stars that belong to the hottest spectral classes O and B. Almost all the blue stars of the Sco-Cen association belong to spectral class B. At a distance of about 400 light-years, they are the closest association - widely spaced grouping - of hot stars as seen from the vantage point of the solar system.

But among all the blue stars of the Sco-Cen association, one white "star" is seen at about 1 o'clock, near the top of the image. That is Omega Centauri, the largest and brightest of all the Milky Way's globular clusters. We are really far away now, because Omega Centauri is about 15,800 light-years away. That is considerably farther away than the most prominent nebulas seen in this APOD, the Lagoon Nebula at far left at about 4,000 light-years and the Carina Nebula at far right at nearly 8,000 light-years.

And that ends this journey from the near to the far in today's APOD. Thanks for the ride, Alex Cherney!

Great color commentary, Ann - and thanks for the guided tour! Living in the Northern Hemisphere of our fair planet, I hope to catch a naked eye glimpse of this strikingly colorful celestial passer-by. The last comet I was witness to was Hale-Bopp back in 1997.
Top Use this chart to help you find Comet 252P/LINEAR at least 1½ hours before sunrise in late March. The area of sky shown is close to the southern horizon for observers at mid-northern latitudes. Symbols show the comet’s location every 8 hours along its track; those with dates are plotted for 4 a.m. Eastern Daylight Time (8h Universal Time) on that date. The comet will likely appear as a soft round glow with a bright center and now tail. The 10° scale bar at far left is about the width of your clenched fist at arm’s length, and the faintest stars shown are magnitude 5½ (visible from a dark site free of light pollution).

(Credit: Sky & Telescope diagram)
Know the quiet place within your heart and touch the rainbow of possibility; be
alive to the gentle breeze of communication, and please stop being such a jerk. — Garrison Keillor
Top

WOW... lots of interesting stuff going on in that... wonderful...
Too bad I can't get out and see it... Mars does not come up until early morning... and then it is still rainy and overcast...

I particularly like this MW shot b/c it begins to actually resolve the stars in the plane of the galaxy. (At least I think that's what the "grain" is. Unless it's a film shot?? Can't find any info about the capture on the imager's page.)
Top

Another comet, P/2016 BA14, made the closest known approach to Earth, and three days ago was imaged by radar.


What are we seeing? If it was a normal light image, that would be sunlight illumination one side.
But this is a radar image, so it cannot be 'lit-up' from the side - the Earth isn't wide enough, even as close as 2.4 million miles away.

JohnD wrote:Another comet, P/2016 BA14, made the closest known approach to Earth, and three days ago was imaged by radar.

What are we seeing? If it was a normal light image, that would be sunlight illumination one side.
But this is a radar image, so it cannot be 'lit-up' from the side - the Earth isn't wide enough, even as close as 2.4 million miles away.

Radar images of comets and asteroids are very complex. They aren't simple spatial maps of surface features. Rather, they are two dimensional datasets consisting of range information (obtained from time delay) and rotational velocity information (obtained from Doppler shifts). This data undergoes an extensive transform (imagine something analogous to tomography) in order to create a feasible 3D model of the body. It's that model that we're seeing in these images, not any kind of image directly constructed from the radar return signal. The apparent side illumination is nothing more than a display choice, not any actual illumination by the radar beam or some other source.
Chris 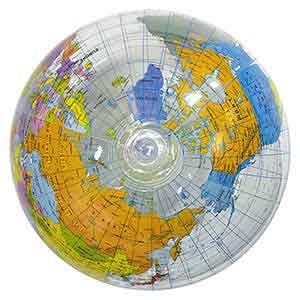 What are we seeing? If it was a normal light image, that would be sunlight illumination one side. But this is a radar image, so it cannot be 'lit-up' from the side - the Earth isn't wide enough, even as close as 2.4 million miles away.

Also... this would be the only angle from which you could view the transparent Earth. What would be missing or confusing

What are we seeing? If it was a normal light image, that would be sunlight illumination one side. But this is a radar image, so it cannot be 'lit-up' from the side - the Earth isn't wide enough, even as close as 2.4 million miles away.

Also... this would be the only angle from which you could view the transparent Earth. What would be missing or confusing

That's an interesting and useful analogy to a radar image. I modified it to crudely simulate a snapshot radar image where the radar beam is perpendicular to Earth's rotation axis and the Doppler (horizontal) axis is scaled to show a spherical Earth. I followed the convention having the illumination direction from the top of the image.

Earth Radar Image Simulation - Radar Perpendicular to Rotation Axis.JPG
You do not have the required permissions to view the files attached to this post.
A pessimist is nothing more than an experienced optimist
Top

Thank you all!
That is most illuminating! And interesting.

So as stated in the report, all that can be told from the data is the shape?
John
Top

JohnD wrote:So as stated in the report, all that can be told from the data is the shape?

Not even that with certainty. The solution to the radar reconstruction is not a closed one- that is, there can be multiple models that yield the same radar signature. The reconstructed shape is statistically likely in most cases, but not certain.
Chris

Another really nice capture Alex - well done!
Hope to see you down at The Briars again one day soon.