The Keyhole in the Carina Nebula

Explanation: The dark dusty Keyhole Nebula gets its name from its unusual shape. The looping Keyhole, in this featured classic image by the Hubble Space Telescope, is a smaller region inside the larger Carina Nebula. Dramatic dark dust knots and complex features are sculpted by the winds and radiation of the Carina Nebula's many massive and energetic stars. In particular, the shape of the dust cloud on the upper left of the Keyhole Nebula may stimulate the human imagination to appear similar to, for example, a superhero flying through a cloud, arm up, with a saved person in tow below. The region lies about 7,500 light-years away in planet Earth's southern sky. The Keyhole Nebula was created by the dying star Eta Carina , out of the frame, which is prone to violent outbursts during its final centuries.

I don't know... to me that feature to the left looks more like the nebula flipping us...
Top

one eye, but very sharp 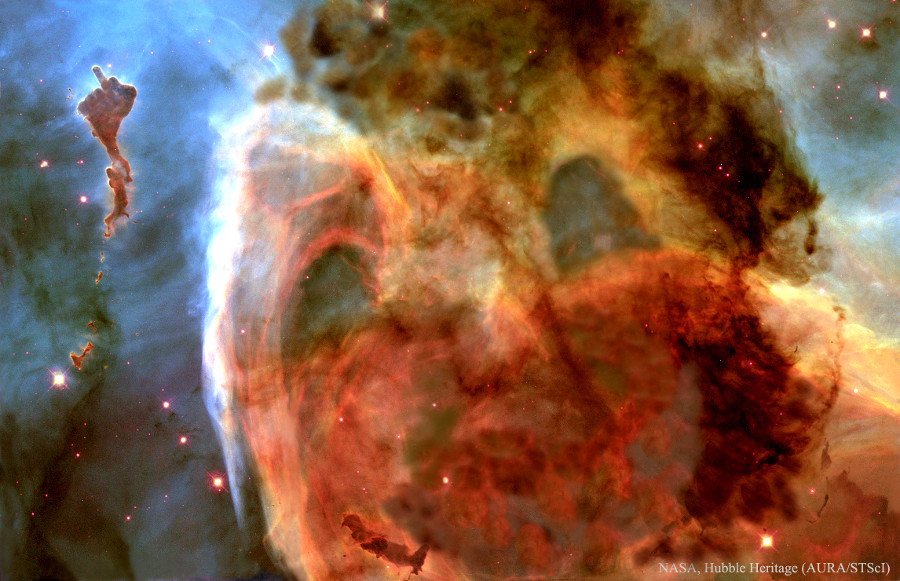 zendae1 wrote:I don't know... to me that feature to the left looks more like the nebula flipping us... Indeed, that feature on the left (which should be a bok globule), sure looks fascinating! I mean, the Keyhole Nebula is just a nebula. Ho hum. Like we haven't seen them before. (Though seriously, with the slight makeup applied by one eye, but very sharp, it does get more eye-catching.)

But that bok globule! It must be light-years long, but it pulls itself together, nevertheless. And look how sharp-edged it is, well, relatively sharp-edged, at least.

And isn't it amazing how LARGE those features are! Look at that protruding "nose", (or worse - that rude finger

), how long and straight it is, and how sharply set off from its surroundings it is. Amazing!

To me it looks as if there is a smaller figure of some sort hanging on to that "fat" guy with the long nose (or finger). The smaller figure looks a little bit like a dog, because it seems to have a tail. We can also see the back legs of the critter. I know, I know - I suffer from a bad case of pareidolia. But it's hard not to, when I see the fantastically shaped bok globules. The ones in the Carina region are particularly suggestive. What about the caterpillar bok globule? Or the part of the Carina Nebula called Loch Ness?

It looks more like a super-hero in combat with an arm extended and a woman hanging on for dear life at the bottom.

But seriously, given the apparent edge definition, and the shape, is this a structure collapsing on itself and about to become a star forming region? If it is, how long will it take? Will (or could) the dust and gas be collapsing at relativistic speeds?
Top

Good Evening: I have always called that thing at the upper left the "Up Yours Nebula."
Top

Guest wrote:It looks more like a super-hero in combat with an arm extended and a woman hanging on for dear life at the bottom.

Yes, I guess that really could be Superman and Lois Lane! The shapeless "body" of Superman could be his cape hiding the outline of his body.

But seriously, given the apparent edge definition, and the shape, is this a structure collapsing on itself and about to become a star forming region? If it is, how long will it take? Will (or could) the dust and gas be collapsing at relativistic speeds?

This "Superman" or "rude finger" structure is (almost certainly) not going to form any stars. It is flying around helplessly in the harsh environment of the Carina Nebula, where it is continuously being battered and beaten by ultraviolet light. In spite of its sharp edges, it is really disintegrating like a knob of butter in a frying pan. Dust pillars in the Carina Nebula.
NASA, ESA, N. Smith (U. California, Berkeley) et al., and The Hubble Heritage Team (STScI/AURA)
But take a look at this structure, which is also located in the Carina Nebula. It is a dust pillar (or rather at least two dust pillars). The fact that they are pillars instead of bok globules means that they are still "attached" rather than flying around. The best-known pillars are probably the "Pillars of Creation" in the Eagle Nebula. These pillars are quite often the site of (low-mass) star formation. In the pillars in the picture at left, there are two stars forming. How can we tell? It's because the not yet fully formed stars are shooting out jets, which are a product of the stars' accretion of material from their surroundings. The parallel jets at top are very obvious in the image, but don't miss the jet in the lower half of the image.

The top jet is precessing, rotating and wobbling, and the jets create bow shocks as they plow into surrounding material.

sffilmstagemusic wrote:Good Evening: I have always called that thing at the upper left the "Up Yours Nebula."

I suppose that's more polite than what I call it.
Top

The upper left image is The Cosmic Finger of Friendship, so named by the Annals of Improbable Research:
http://www.improbable.com/news/2001/nov ... inger.html
Top