Explanation: A little spacecraft that was presumed lost has now been found. In 2014, the Philae lander slowly descended from its parent Rosette spacecraft to the nucleus of Comet C67/P Churyumov-Gerasimenko. At the surface, after a harpoon malfunction, the lander bounced softly twice and eventually sent back images from an unknown location. Earlier this month, though, Rosette swooped low enough to spot its cub. The meter-sized Philae is seen on the far right of the main image, with inset images showing both a zoom out and a zoom in. At the end of this month, Rosette itself will be directed to land on 67P, but Rosette's landing will be harder and, although taking unique images and data, will bring the mission to an end.

That is the pits
Wolf Kotenberg
Top 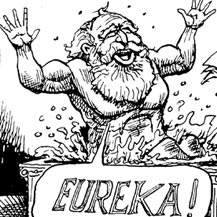 Archimedes: Eureka! (I have found it!)
Illustration: Kevin Kallaugher.

Rosetta and Philae. Illustration: ESA.
Archimedes: EUREKA!!! (I have found it!)

http://asterisk.apod.com/viewtopic.php?p=261831#p261831
Know the quiet place within your heart and touch the rainbow of possibility; be
alive to the gentle breeze of communication, and please stop being such a jerk. — Garrison Keillor
Top

I think the phrase "dirty snowball" ought to be revised to "gnarly snowball".

Philae picked a nice shady place to rest in peace.

Could the Rosetta craft reflect enough light off it's solar panels to wake the lander? It is fun to imagine maneuvering the space craft into an orbit that complex and orient it to track the sun's reflection at Philae. Has a stationary orbit ever been achieved during this mission? Is all this impossible because of twisting, tumbling, rotation of Comet 67P ?

Thanks to several emailers for pointing out that sometimes "Rosetta" was misspelled in in the initial NASA caption. This has now been corrected. - RJN
Top

Awesome to see the lander finally. Like the proverbial needle in the haystack. You may think a comet is small, until you try to locate something much smaller on it. It does appear sideways tipped over, with one 'leg' in the 'air'. Unfortunate for its science experiments, but at least we found it!
Top

Any word on what the whitish patches are (there is one in the lower-right corner)?
Top

One of the best APOD pictures yet! Interestingly, the "terrain" appears to be very rough, rubble-strewn, and filled with veins and crevices that suggest some sort of fracturing or layering that is most noticeable in the lower left corner of the picture. What are ESA and NASA scientists saying about this? What do they think this indicates about the comet?
Top

MRO found Beagle II in a much bigger haystack. It is amazing what the flight dynamics people can come up with, even in the relatively tiny gravity field of a comet.
Top

That Big Rock, right in the middle of the image of this rather large Icy Dirtball, appears to indicate layering...Warped Layering
Top

Must the mission end with a crash landing? With a low gravitational influence, wouldn't it be possible make calculations in order to land more softly and give the Rosetta a chance to perhaps gather some of the data that the Philae Lander was unable to obtain? After watching lander after lander far exceed expectations of lifespan and missions being extended, I would hope that schedules could be bent a little, envelopes pushed, nominal risks be taken for an already partially failed mission in order to optimize the fact that eyes are already there, right there on the comet!
Top

Catalina wrote:Must the mission end with a crash landing? With a low gravitational influence, wouldn't it be possible make calculations in order to land more softly and give the Rosetta a chance to perhaps gather some of the data that the Philae Lander was unable to obtain?

No. In order to maintain contact with Earth, Rosetta orients itself dynamically to keep an antenna pointed this way. The moment it touches the surface that ability is lost, and it's game over. It's not that the landing will necessarily be hard enough to damage the spacecraft, just that there's no way to maintain communication. (Also, there's really no instrumentation on Rosetta that is really designed to be useful on the surface.)
Chris

Glad they found it. 2 billion dollar rescue mission to MOVE it....

What could happen if this fissure blows out the lander thru some process and the solar panels are panelling again ?
Wolf Kotenberg
Top

ta152h0 wrote:What could happen if this fissure blows out the lander thru some process and the solar panels are panelling again ?

Without the mothership, it has no way to communicate with Earth.
Chris

Comet 67P is the scariest place i have ever seen. Gives me the creeps every-time i see it. You can't tell up from down and it looks like you would fall off if you took 2 steps.
Top

»Only a dead Earth is a good Earth.«
Top

bactame wrote:Comet 67P is the scariest place i have ever seen. Gives me the creeps every-time i see it. You can't tell up from down and it looks like you would fall off if you took 2 steps.

You might make it off in one step if you tried.
Just call me "geck" because "zilla" is like a last name.
Top

<<The plastic pink flamingo designed in 1957 by Don Featherstone for Union Products became an icon of pop culture that won him the Ig Nobel Prize for Art in 1996. Featherstone was the first Ig Nobel Prize winner to appear in person to accept the award; Don and his wife, Nancy, came to almost every Ig Nobel Prize ceremony in succeeding years, where adoring throngs cheered them. Pink flamingos made by Union Products from 1987 (the 30th anniversary) until 2001 can be identified by the signature of Don Featherstone located on the rear underside. These official flamingos were sold in pairs, with one standing upright and the other with its head low to the ground, "feeding". After Featherstone's retirement in 2000, Union Products began producing birds without the signature. The Annals of Improbable Research (bestowers of the Ig Nobel prize) teamed up with the Museum of Bad Art to protest this omission in the form of a boycott.>>

Where is Philae with respect to where it was intended to land? I know that speculation was that Philae drifted into a dark and vertical face nearby after bouncing. However the terrain shown in today's APOD seems far too rugged to have been the intended landing area.
Top
26 posts