Layers of a Total Solar Eclipse

Explanation: Neither rain, nor snow, nor dark of night can keep a space-based spacecraft from watching the Sun. In fact, from its vantage point 1.5 million kilometers sunward of planet Earth, NASA's SOlar Heliospheric Observatory (SOHO) can always monitor the Sun's outer atmosphere, or corona. But only during a total solar eclipse can Earth-based observers also see the lovely coronal streamers and structures - when the Moon briefly blocks the overwhelmingly bright solar surface. Then, it becomes possible to follow detailed coronal activity all the way down to the Sun's surface. In the outside layer of this composite image, SOHO's uninterrupted view of the solar corona during last month's eclipse is shown in orange hues. The middle, donut-shaped region is the corona as recorded by the Williams College Eclipse Expedition to Salem, Oregon. Simultaneously, the inner view is from NASA's Earth-orbiting Solar Dynamics Observatory, which, being outside of totality, was able to image the face of the Sun in extreme ultraviolet light, shown in gold.

Interesting way to show that.... 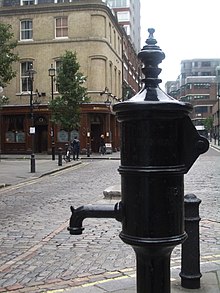 <<Soho is an area of the City of Westminster and is part of the West End of London. Long established as an entertainment district, for much of the 20th century Soho had a reputation as a base for the sex industry in addition to its night life and its location for the headquarters of leading film companies. The name "Soho" first appears in the 17th century. Most authorities believe that the name derives from a former hunting cry. James Scott, 1st Duke of Monmouth, used "soho" as a rallying call for his men at the Battle of Sedgemoor on 6 July 1685, half a century after the name was first used for this area of London.

A significant event in the history of epidemiology and public health was Dr. John Snow's study of an 1854 outbreak of cholera in Soho. He identified the cause of the outbreak as water from the public water pump located at the junction of Broad Street (now Broadwick Street) and Cambridge Street (now Lexington Street). John Snow mapped the addresses of the sick, and noted that they were mostly people whose nearest access to water was the Broad Street pump. He persuaded the authorities to remove the handle of the pump, thus preventing any more of the infected water from being collected. The spring below the pump was later found to have been contaminated with sewage. This is an early example of epidemiology, public health medicine and the application of science—the germ theory of disease—in a real-life crisis. A replica of the pump, with a memorial plaque and without a handle (to signify John Snow's action to halt the outbreak) was erected near the location of the original pump.

The Soho name has been imitated by other entertainment and restaurant districts such as the Soho, Hong Kong entertainment zone; the cultural and commercial area of Soho in Málaga; the office and retail skyscraper development of Wangjing SOHO in suburban Beijing; the SoHo (South of Horton) neighbourhood in London, Ontario, Canada; and the fashionable area of Palermo Soho in Buenos Aires. The New York City neighborhood of SoHo, Manhattan gets its name from its location SOuth of HOuston Street, but is also a reference to London's Soho.>>

Good alignment between eclipse from space & earth, but solar disk flares don't quite connect. I imagine you were careful. Nice image.
Top

SoHO is not a Earth-orbiting satellite. In fact the observatory is orbiting around Lagrangian L1 point and the Sun (https://www.youtube.com/watch?v=cGm-nrgAIzM).
Top

I seem to recall this not being the first time this mistake has been published on APOD...
Just call me "geck" because "zilla" is like a last name.
Top

I seem to recall this not being the first time this mistake has been published on APOD...

I seem to recall this not being the first time this mistake has been published on APOD...

How many UFO's can you count?