Explanation: Double, double toil and trouble; Fire burn, and cauldron bubble .... maybe Macbeth should have consulted the Witch Head Nebula. A frighteningly shaped reflection nebula, this cosmic crone is about 800 light-years away though. Its malevolent visage seems to glare toward nearby bright star Rigel in Orion, just off the right edge of this frame. More formally known as IC 2118, the interstellar cloud of dust and gas is nearly 70 light-years across, its dust grains reflecting Rigel's starlight. In this composite portrait, the nebula's color is caused not only by the star's intense bluish light but because the dust grains scatter blue light more efficiently than red. The same physical process causes Earth's daytime sky to appear blue, although the scatterers in planet Earth's atmosphere are molecules of nitrogen and oxygen. 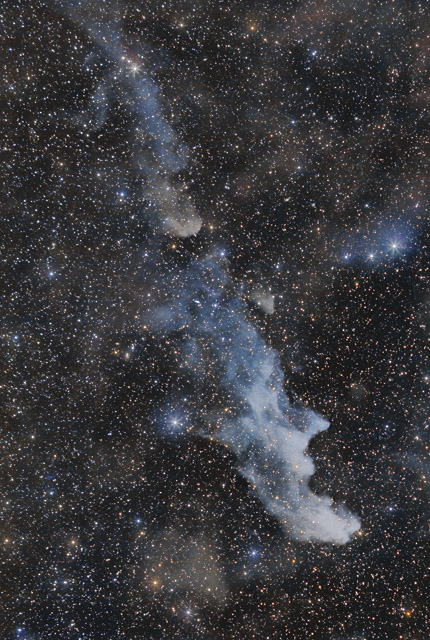 In Scott Rosen's image, start at the bottom to see the witch's protruding chin. Above the chin is her gaping mouth, and you can see both the upper and the lower lip. Above the upper lip is the crooked nose, and to the left of it is what appears to be an empty eye socket. (Yes, I guess it really is empty.

Above the witch's nose is her forehead and her eyebrow and maybe her weird witch hairdo, and then her high witch hat which (witch?) appears to be flying off her head.

Now that's what I call a witch head!

Edit: The Witch in Scott Rosen's image is indeed staring at Rigel off the right frame of the picture. I think that Rigel is off the left frame of the APOD.
Color Commentator
Top

I suppose a better photo of Rigel and the Witch Head can be seen here, https://apod.nasa.gov/apod/ap091229.html If I figure that bright blue star is Rigel, then Rigel would be off the left edge of the frame in today's APOD.
Top

If you look at the SMALL IMAGE of the APOD on the this page, you might just see another "Witch"...from the bottom, her chin and mouth...even some "light" teeth...then a button of a nose...slightly above, and to our right the "void" areas look like an eye socket as well...and to our left, some of what would be the right eye...above that...her "Hat Line"...and her hat.... awesome...

Its cloud retains power of the " fruit"of all evil.