Explanation: What star created this huge puffball? What's pictured is the hot expanding nebula of Tycho's supernova remnant, the result of a stellar explosion first recorded over 400 years ago by the famous astronomer Tycho Brahe. The featured image is a composite of three X-ray colors taken by the orbiting Chandra X-ray Observatory. The expanding gas cloud is extremely hot, while slightly different expansion speeds have given the cloud a puffy appearance. Although the star that created SN 1572, is likely completely gone, a star dubbed Tycho G, too dim to be discerned here, is thought to be a companion. Finding progenitor remnants of Tycho's supernova is particularly important because the supernova is of Type Ia, an important rung in the distance ladder that calibrates the scale of the visible universe. The peak brightness of Type Ia supernovas is thought to be well understood, making them quite valuable in exploring the relationship between faintness and farness in the distant universe.

How wide is the gas cloud and how fast is it expanding?
Top

See that little blue arc at about 8 o'clock? I have read somewhere that this little arc just possibly shows us where the companion of Tycho's supernova is located.

Like the caption said, astronomers have suspected that the companion survived the explosion. Tycho's supernova was a supernova type Ia, where a white dwarf accretes matter from a nearby companion, until the white dwarf gets "overloaded" and breaks through the Chandrasekhar limit, causing a runaway deflagration of the white dwarf star which explodes with a predicted luminosity. The predictability of the luminosity of supernovas type Ia makes these exploding white dwarfs particularly useful as standard candles at cosmological distances. 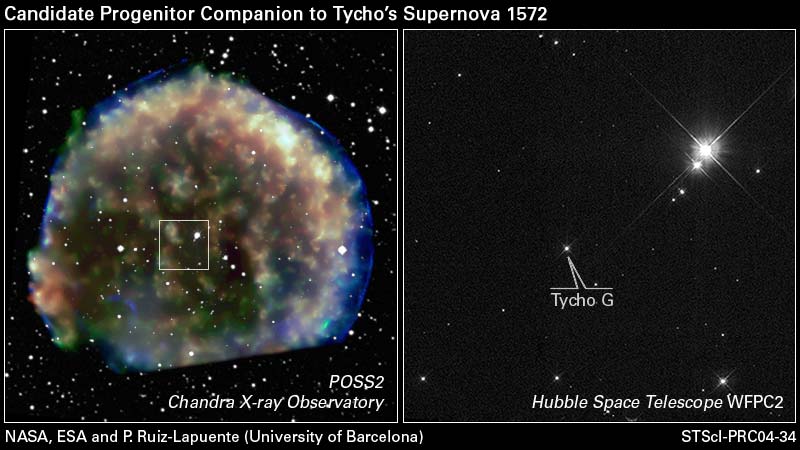 The suspected companion is apparently located far away from the little blue arc. Well, it is fun to see a possible companion anyway.

Tycho G has been proposed as the surviving binary companion star of the SN 1572 supernova event. The star is located about 12,000 light-years away in the constellation Cassiopeia. It is a subgiant, similar to our Sun in temperature, but more evolved and luminous.
...
Tycho G is travelling away from us at nearly 80 km/s, much faster than the mean velocity of other stars in its stellar neighbourhood. It matches the properties of some models for the pre-supernova star system, although other studies exclude it.

If the star is a subgiant, it might just possibly have been a true giant before it was robbed of much of its mass by a "vampire-like", gas-sucking white dwarf companion.

Alastair asks for help to scale this, and so do I!
surfing around the subject, the Remnant is said to tbe 8-9000 light years away, and G 12000! Some companion star!
And how big is the remnant now. There is a NASA video that purports to show changes in the cloud as it continues to expand - https://www.youtube.com/watch?v=cPG27uaJC3U, so it must be moving pretty fast, and so after 400 years could it be several hundred LY across?

Ann is the colour queen, but these are X-ray frequencies. There's a video in the Wiki page linked to from the blurb (Tycho's supernova remnant) that breaks down the three frequencies used.
John
Top

I thought that Type Ia supernovas were an accurate distance marker?

I thought that Type Ia supernovas were an accurate distance marker?

SN Ia light curves.Source:
http://community.dur.ac.uk/john.lucey/b ... ridge.html
The way I understand it, it is the light curve of the supernova type Ia itself that is the distance marker, not the supernova remnant.

Don't understand how that can be, Ann.
The way the luminosity fades will be the same however far away it is.
But as a "standard candle", an SN that appears to have brightness of 1, while one that is twice as far away will have a brightness of 1/SQR(2)?

JohnD wrote: ↑Sun Jan 13, 2019 12:11 pm Don't understand how that can be, Ann.
The way the luminosity fades will be the same however far away it is.
But as a "standard candle", an SN that appears to have brightness of 1, while one that is twice as far away will have a brightness of 1/SQR(2)?

Well, the way I understand it, we are dependent on Tycho's observations in 1572 and 1573 to estimate the distance to the supernova. I guess that, as reliable as Tycho was for his time, his observations still weren't as good as modern observations. That's where the uncertainties come from.

But Gaia should hopefully settle this uncertainty once and for all. If nothing else, Gaia should defintely be able to pin down the distance to the supernova's possible companion, Tycho G.

Yes, but Ann has demonstrated that the way the luminosity fades will determine how bright the supernova was when it peaked. 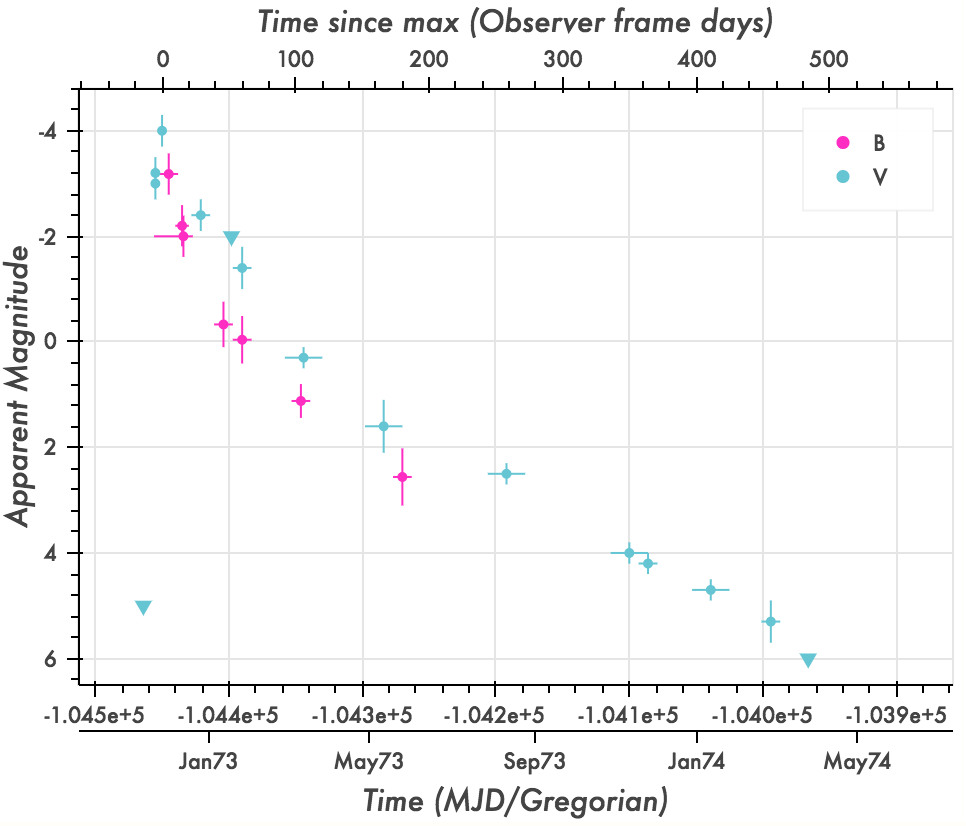 
<<Tycho's supernova was classified as type I on the basis of its historical light curve soon after type I and type II supernovae were first defined on the basis of their spectra. The X-ray spectrum of the remnant showed that it was almost certainly of type Ia, but its exact classification continued to be debated until the detection of a light echo in 2008 gave final confirmation that it is a normal type Ia.

The classification as a type Ia supernova of normal luminosity allows an accurate measure of the distance to SN 1572. The peak absolute magnitude can be calculated from the B-band decline rate to be −19.0±0.3. Given estimates of the peak apparent magnitude and the known extinction of 1.86±0.2 magnitudes, the distance is 3.8+1.5−0.9 kpc.

This SNR is ridiculously faint in the optical.
Top

I can see a little red arc in there. Would that be the same as the "blue" X-ray arc in today's APOD?

Tycho's Supernova Remnant in the Infrared

<<This image from NASA's Wide-field Infrared Survey Explorer (WISE) takes in several interesting objects in the constellation Cassiopeia, none of which are easily seen in visible light. The red circle visible in the upper left part of the image is SN 1572, often called "Tycho's Supernova." This remnant of a star explosion is named after the astronomer Tycho Brahe, although he was not the only person to observe and record the supernova. When the supernova first appeared in November 1572, it was as bright as Venus and could be seen in the daytime. Over the next two years, the supernova dimmed until it could no longer be seen with the naked eye. It wasn't until the 1950s that the remnants of the supernova could be seen again with the help of telescopes.

When the star exploded, it sent out a blast wave into the surrounding material, scooping up interstellar dust and gas as it went, like a snow plow. An expanding shock wave traveled into the surroundings and a reverse shock was driven back in toward the remnants of the star. Previous observations by NASA's Spitzer Space Telescope indicate that the nature of the light that WISE sees from the supernova remnant is emission from dust heated by the shock wave.

In the center of the image is a star-forming nebula of dust and gas, called S175. This cloud of material is about 3,500 light-years away and 35 light-years across. It is being heated by radiation from young, hot stars within it, and the dust within the cloud radiates infrared light. On the left edge of the image, between the Tycho supernova remnant and the very bright star, is an open cluster of stars, King 1, first catalogued by Ivan King, an astronomer at UC Berkeley, Calif. This cluster is about 6,000 light-years away, 4 light-years across and is about 2 billion years old.

Also of interest in the lower right of the image is a cluster of infrared-emitting objects. Almost all of these sources have no counterparts in visible-light images, and only some have been catalogued by previous infrared surveys. There are indications that they may be young stellar objects associated with a dense nebula in the area. Young stellar objects (YSOs) are stars in their earliest stages of life. YSOs are surrounded by an envelope of dust, which would explain the very red color of the sources in this image.

All four infrared detectors aboard WISE were used to make this mosaic. The image spans an area of 1.6 x 1.6 degrees on the sky or about 3 times as wide and high as the full moon. Color is representational: blue and cyan represent infrared light at wavelengths of 3.4 and 4.6 microns, which is dominated by light from stars. Green and red represent light at 12 and 22 microns, which is mostly light from warm dust.>>

https://en.wikipedia.org/wiki/SN_1572#In_literature wrote:
<<In the ninth episode of James Joyce's Ulysses, Stephen Dedalus associates the appearance of the supernova with the youthful William Shakespeare, and in the November 1998 issue of Sky & Telescope, three researchers from Southwest Texas State University, Don Olson and Russell Doescher of the Physics Department and Marilynn Olson of the English Department, argued that this supernova is described in Shakespeare's Hamlet, specifically by Bernardo in Act I, Scene i.>>

Don’t tell them he was nine years old when it was quenched.

And from her arms.

Wait to be wooed and won. Ay, meacock. Who will woo you?

—What is that, Mr Dedalus? the quaker librarian asked. Was it a
celestial phenomenon?

Barnardo: Sit downe I pray, and let vs once againe
Horatio: Wel, sit we downe, and let vs heare Bernardo speake of this.

Fortenbrasse: Captaine, from vs goe greete The king of Denmarke:

Along with the rest of us.

That too takes two to tango.