The Umbra of Earth

Explanation: The dark, inner shadow of planet Earth is called the umbra. Shaped like a cone extending into space, it has a circular cross section most easily seen during a lunar eclipse. For example, on January 21 the Full Moon slid across the northern half of Earth's umbral shadow, entertaining moonwatchers around much of the planet. In the total phase of the eclipse, the Moon was completely within the umbra for 63 minutes. Recorded under clear, dark skies from the hills near Chiuduno, Italy this composite eclipse image uses successive pictures from totality (center) and partial phases to trace out a large part of the umbra's curved edge. Reflecting sunlight scattered by the atmosphere into Earth's shadow, the lunar surface appears reddened during totality. But close to the umbra's edge, the limb of the eclipsed Moon shows a distinct blue hue. The blue eclipsed moonlight originates as rays of sunlight pass through layers high in the upper stratosphere, colored by ozone that scatters red light and transmits blue.

How cool would it be to be on the moon during a solar eclipse...
Top

A solar eclipse would be rather boring on the Moon. All you'd see would be a small shadow crossing the face of the Earth in the sky. What is impressive is a lunar eclipse seen from the Moon, where the Earth transits the Sun. Not as impressive as seeing the Moon block the Sun from Earth (i.e. a solar eclipse), but still pretty cool to see the ring of sunrises and sunsets that would illuminate the lunar night landscape with dim red light all around you. 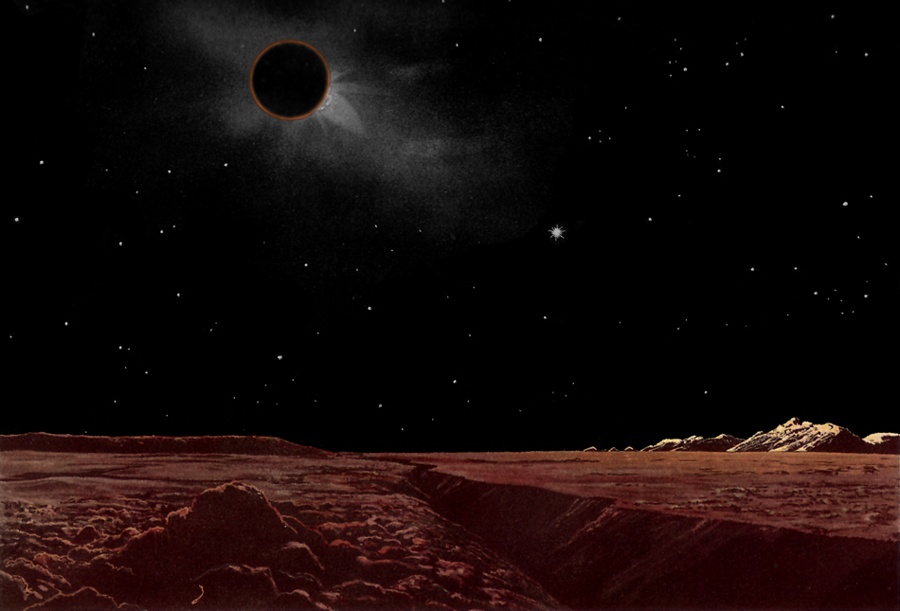 Painting by Lucien Rudaux, showing what a lunar eclipse might look like when viewed from the surface of the Moon.

How cool would it be to be on the moon during a solar eclipse...

If you mean a solar eclipse by the Earth: http://asterisk.apod.com/viewtopic.php? ... 01#p289250
Art Neuendorffer
Top

Painting by Lucien Rudaux, showing what a lunar eclipse might look like when viewed from the surface of the Moon.

How cool would it be to be on the moon during a solar eclipse...

Me, of course, I love the blue hue of the edge of the limb of the eclipsed Moon. And red and blue look good together, like blue stars next to a red emission nebula.

OK; enough eclipse pictures for a while!

While I like them; seems as though there are other interesting photos to behold!

OK; enough eclipse pictures for a while!

While I like them; seems as though there are other interesting photos to behold!

So you aren't specifically taking umbrage at them.


https://www.etymonline.com/word/umbrage#etymonline_v_4456 wrote:
umbrage (n.) early 15c., "shadow, darkness, shade," from Old French ombrage "shade, shadow," from noun use of Latin umbraticum "of or pertaining to shade; being in retirement," neuter of umbraticus "of or pertaining to shade," from umbra "shade, shadow". The English word had many figurative uses in 17c.; the one remaining, "suspicion that one has been slighted," is recorded by 1610s; hence phrase to take umbrage at, attested from 1670s. Perhaps the sense notion is similar to whatever inspired the modern (by 2013) slang verbal phrase throw shade "(subtly) insult (something or someone)."


HAMLET: Sir, his definement suffers no perdition in you;
Art Neuendorffer
Top
7 posts • Page 1 of 1