Explanation: What created these huge galactic superbubbles? Two of these unusual bubbles, each spanning thousands of light-years, were recently discovered near the center of spiral galaxy NGC 3079. The superbubbles, shown in purple on the image right, are so hot they emit X-rays detected by NASA's Earth-orbiting Chandra X-Ray Observatory. Since the bubbles straddle the center of NGC 3079, a leading hypothesis is that they were somehow created by the interaction of the central supermassive black hole with surrounding gas. Alternatively, the superbubbles might have been created primarily by the energetic winds from many young and hot stars near that galaxy's center. The only similar known phenomenon is the gamma-ray emitting Fermi bubbles emanating from the center of our Milky Way Galaxy, discovered 10 years ago in images taken by NASA's Fermi satellite. Research into the nature of the NGC 3079 superbubbles will surely continue, as well as searches for high-energy superbubbles in other galaxies.

viewtopic.php?t=39210
Know the quiet place within your heart and touch the rainbow of possibility; be
alive to the gentle breeze of communication, and please stop being such a jerk. — Garrison Keillor
Top 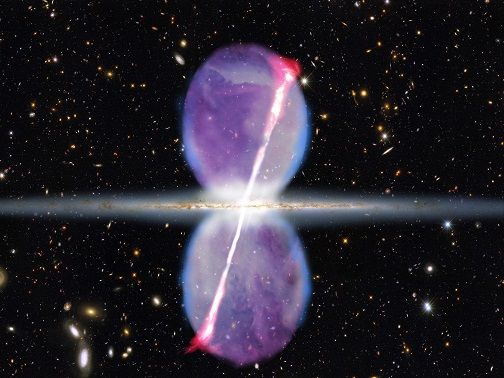 APOD Robot wrote:
Research into the nature of the NGC 3079 superbubbles will surely continue, as well as searches for high-energy superbubbles in other galaxies.


solstation.com wrote:
On May 29, 2012, astronomers using the Fermi Gamma-ray Space Telescope (FGST, formerly named GLAST) announced the detection of giant gamma-ray jets emanating from the galactic core above and below the Milky Way's galactic center and extending some 27,000 light-years through the central bulge.
...
The astronomers believe that the faint jets are a ghostly "after-image" of much brighter beams produced by a much more active, galactic nucleus around a million years ago. These jets likely were produced when plasma squirted out from the supermassive black hole at the galactic center after it consumed a molecular cloud and stars totalling roughly around 10,000 Solar-masses, and they followed "a corkscrew-like magnetic field that kept it tightly focused."

solstation.com wrote:
On January 3, 2013, astronomers working with the CSIROs 64-m Parkes radio telescope announced the detection of two giant bi-polar, supersonic outflows of charged particles, which emerge from the center of our Galaxy as linearly polarized, radio lobes (with "three ridge-like substructures") and stretch more than halfway across the sky. The flows extend for roughly 50,000 light-years in both directions outwards from the galactic plane at the core.
...
nstead being created by quasar-like outbursts from the supermassive black hole at the Galactic Core, the radio observations appear to confirm that the outflows are driven by many generations of new stars forming and exploding as supernovae in the Galactic Core over the last hundred million years, along with their magnetic fields (CSIRO news release; and Carretti et al, 2013).

So what are all the other purple bubbles in the image? X-Ray emitting stars within our own galaxy?
Top

The Crab Nebula and its pulsar. Photo: NOAO.
As you can see in the APOD, most of the purple sources are located in the disk of the galaxy NGC 3079. That is no accident, because they belong to NGC 3079. They are most likely neutron stars or pulsars, but I suppose that some of them might be accreting stellar mass or possibly intermediate mass black holes.

Take a look at the Crab Nebula at right. It is the remnant of a bright supernova that exploded in 1054 AD.

In the center of the Crab Nebula is a tiny, extremely compact object, which is the remnant of the core of the star that exploded in 1054.

At the center of the nebula lies the Crab Pulsar, a neutron star 28–30 kilometres (17–19 mi) across with a spin rate of 30.2 times per second,[6] which emits pulses of radiation from gamma rays to radio waves. At X-ray and gamma ray energies above 30 keV, the Crab Nebula is generally the brightest persistent source in the sky, with measured flux extending to above 10 TeV.

The Crab pulsar is a neutron star, which is to say that it has collapsed under its own gravity to the last possible stage of compression until it has to collapse into a black hole. But the Crab Nebula pulsar is not only a neutron star, but also a pulsar, because it emits pulses that glow bright at X-ray wavelengths. The pulses also appear to flicker on and off as the pulsar itself rotates 30.2 times per second. In the picture at left, you can see how the pulsar appears to turn on and off. So what part do the actual pulses play and what part does the breakneck rotation play? Good question, and one that I can't answer!

The object to the left of the Crab pulsar is a normal star.

Several of the purple sources in NGC 3079 are likely to be pulsars or neutron stars.

This is a composite Messier 82 image made from three satellite observation projects. Visible aspects of the galaxy were taken by the HST. Spitzer photographed it in infrared, which shows dust emission, and Chandra photographed it in X-ray (showing mostly synchrotron emissions from fast electrons). The X-ray emission is shown in the blue parts. M82, like most galaxies, hosts a supermassive black hole at its center with a mass of approximately 3 x 107 solar masses as measured from stellar dynamics. 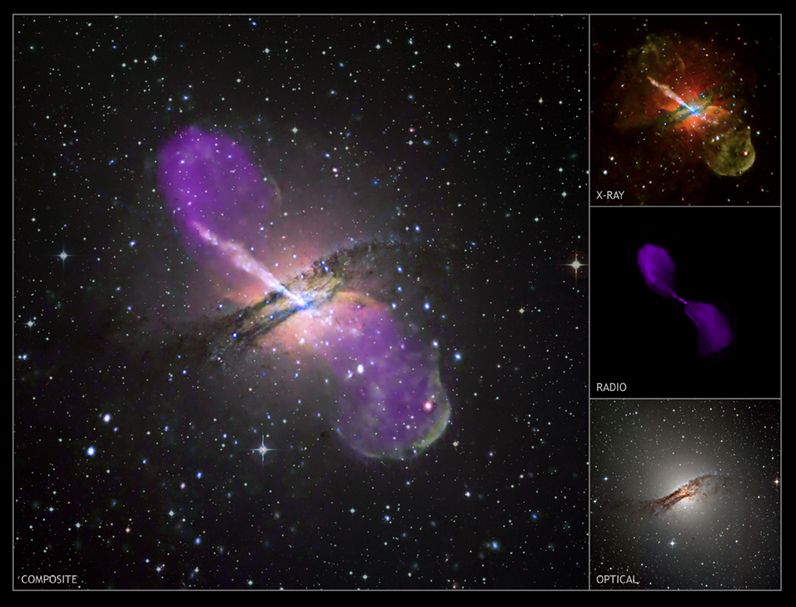 Centaurus A with superbubbles and a jet.
Source: https://apod.nasa.gov/apod/ap080110.html

And giant elliptical galaxy M87 recently ate a snack, too. Its supermassive central black hole that got indigestion as it munched on its snack likely weighs around 7 billion solar masses.

But hey, Art, I thought that the giant bubbles of M82 were due to extremely high numbers of supernova explosions from the starburst rather than outbursts of the galaxy's central black hole. Note that we can't see a jet in M82.

But hey, Art, I thought that the giant bubbles of M82 were due to extremely high numbers of supernova explosions from the starburst rather than outbursts of the galaxy's central black hole. Note that we can't see a jet in M82.

I've always taken the position that current or past jets from galaxy central black holes are the
primary source for such bubbles... but apparently this is up for debate among professionals: