Near the Center of the Lagoon Nebula

Explanation: Stars are battling gas and dust in the Lagoon Nebula but the photographers are winning. Also known as M8, this photogenic nebula is visible even without binoculars towards the constellation of the Archer (Sagittarius). The energetic processes of star formation create not only the colors but the chaos. The glowing gas results from high-energy starlight striking interstellar hydrogen gas and trace amounts of sulfur, and oxygen gases. The dark dust filaments that lace M8 were created in the atmospheres of cool giant stars and in the debris from supernovae explosions. The light from M8 we see today left about 5,000 years ago. Light takes about 50 years to cross this section of M8.

Interesting APOD. It shows how the "Lagoon sandbank" (The thick dust lane stretching diagonally from upper left to lower right) is connected to the chaotic in the very center of the Lagoon Nebula, where you find new high-mass star forming. 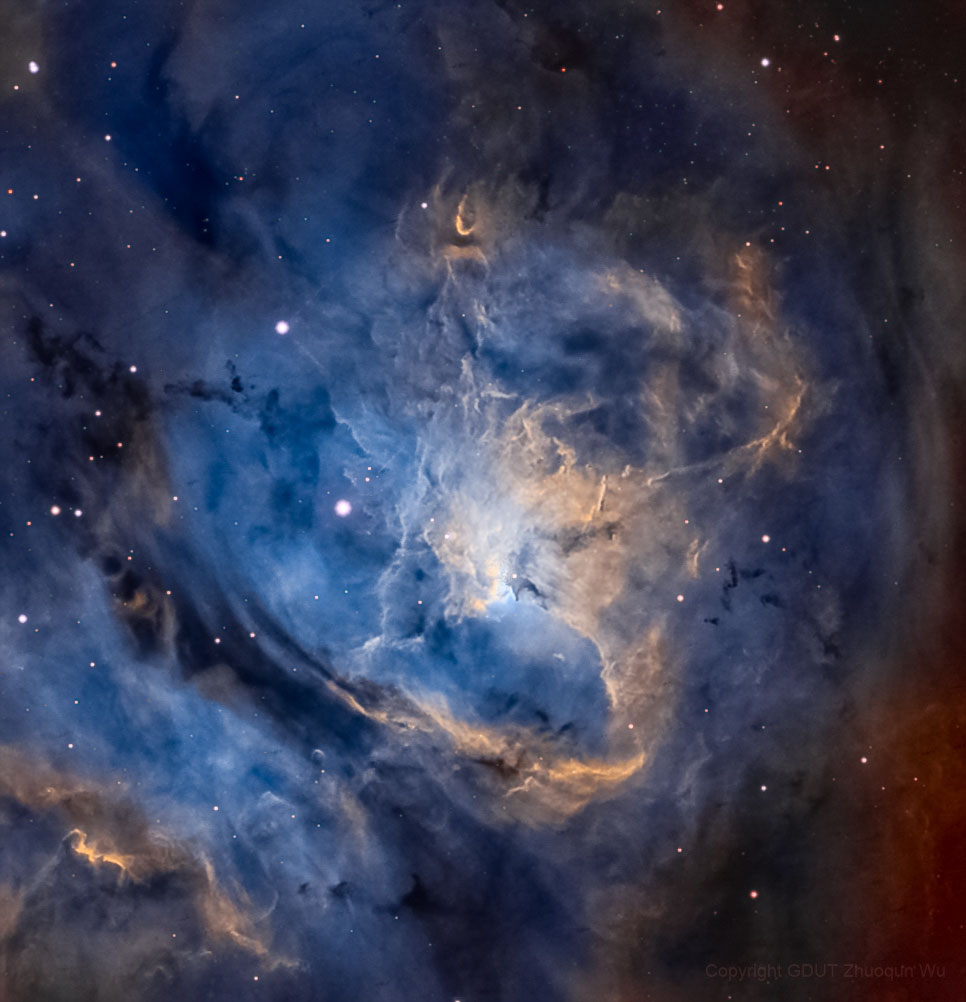 
The picture at right brings out the main feature of the center of the Lagoon Nebula, the central Hourglass Nebula of the Lagoon.

I recommend this 3 MB picture of the Lagoon Nebula, again by Williams Sea and Sky. It really allows you to explore some details in the Lagoon, while at the same time giving you the big picture.

Probability this is the most beautiful photo I have seen of the Lagoon Nebula! Kudos to the photographer! 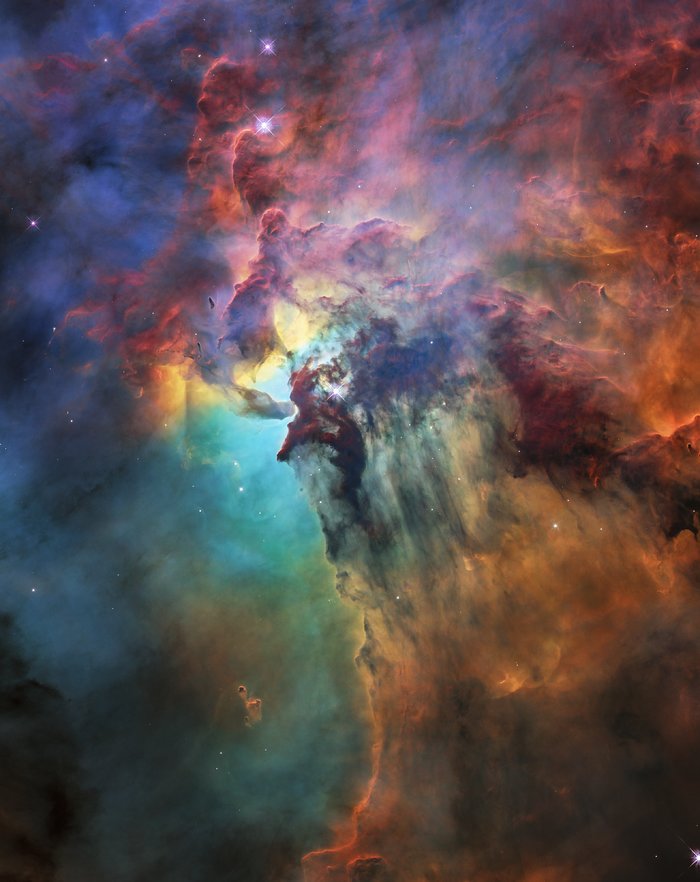 <<This colourful cloud of glowing interstellar gas is just a tiny part of the Lagoon Nebula, a vast stellar nursery. This nebula is a region full of intense activity, with fierce winds from hot stars, swirling chimneys of gas, and energetic star formation all embedded within a hazy labyrinth of gas and dust. Hubble used both its optical and infrared instruments to study the nebula, which was observed to celebrate Hubble’s 28th anniversary.

Since its launch on 24 April 1990, the NASA/ESA Hubble Space Telescope has revolutionised almost every area of observational astronomy. It has offered a new view of the Universe and has reached and surpassed all expectations for a remarkable 28 years. To celebrate Hubble’s legacy and the long international partnership that makes it possible, each year ESA and NASA celebrate the telescope’s birthday with a spectacular new image. This year’s anniversary image features an object that has already been observed several times in the past: the Lagoon Nebula.

The Lagoon Nebula is a colossal object 55 light-year wide and 20 light-years tall. Even though it is about 4000 light-years away from Earth, it is three times larger in the sky than the full Moon. It is even visible to the naked eye in clear, dark skies. Since it is relatively huge on the night sky, Hubble is only able to capture a small fraction of the total nebula. This image is only about four light-years across, but it shows stunning details.

The inspiration for this nebula’s name may not be immediately obvious in this image. It becomes clearer only in a wider field of view, when the broad, lagoon-shaped dust lane that crosses the glowing gas of the nebula can be made out. This new image, however, depicts a scene at the very heart of the nebula.

Like many stellar nurseries, the nebula boasts many large, hot stars. Their ultraviolet radiation ionises the surrounding gas, causing it to shine brightly and sculpting it into ghostly and other-worldly shapes. The bright star embedded in dark clouds at the centre of the image is Herschel 36. Its radiation sculpts the surrounding cloud by blowing some of the gas away, creating dense and less dense regions.

Among the sculptures created by Herschel 36 are two interstellar twisters — eerie, rope-like structures that each measure half a light-year in length. These features are quite similar to their namesakes on Earth — they are thought to be wrapped into their funnel-like shapes by temperature differences between the hot surfaces and cold interiors of the clouds. At some point in the future, these clouds will collapse under their own weight and give birth to a new generation of stars.

Hubble observed the Lagoon Nebula not only in visible light but also at infrared wavelengths. While the observations in the optical allow astronomers to study the gas in full detail, the infrared light cuts through the obscuring patches of dust and gas, revealing the more intricate structures underneath and the young stars hiding within it. Only by combining optical and infrared data can astronomers paint a complete picture of the ongoing processes in the nebula.>>

<<Bucephalus or Bucephalas (Βουκεφάλας, from βοῦς bous, "ox" and κεφαλή kephalē, "head" meaning "ox-head" after a branding mark depicting an ox's head on his haunch) was the horse of Alexander the Great, and one of the most famous horses of antiquity. A massive creature with a massive head, Bucephalus is described as having a black coat with a large white star on his brow. He is also supposed to have had a "wall eye" (blue eye), and his breeding was that of the "best Thessalian strain."

Plutarch says in 344 BC, at twelve or thirteen years of age, Alexander of Macedonia won the horse by making a wager with his father: A horse dealer named Philonicus the Thessalian offered Bucephalus to King Philip II for the remarkably high sum of 13 talents. Because no one could tame the animal, Philip was not interested. However, Alexander was, and he offered to pay himself should he fail.

Alexander was given a chance and surprised all by subduing it. He spoke soothingly to the horse and turned it toward the sun so that it could no longer see its own shadow, which had been the cause of its distress. Dropping his fluttering cloak as well, Alexander successfully tamed the horse. Plutarch says that the incident so impressed Philip that he told the boy, "O my son, look thee out a kingdom equal to and worthy of thyself, for Macedonia is too little for thee."

The value which Alexander placed on Bucephalus emulated his hero and supposed ancestor Achilles, who claimed that his horses were "known to excel all others—for they are immortal. Poseidon gave them to my father Peleus, who in his turn gave them to me."

Arrian states, with Onesicritus as his source, that Bucephalus died at the age of thirty. Other sources, however, give as the cause of death not old age or weariness, but fatal injuries at the Battle of the Hydaspes (June 326 BC), in which Alexander's army defeated King Porus. Alexander promptly founded a city, Bucephala, in honour of his horse. It lay on the west bank of the Hydaspes river (modern-day Jhelum in Pakistan).

The legend of Bucephalus grew in association with that of Alexander, beginning with the fiction that they were born simultaneously: some of the later versions of the Alexander Romance also synchronized the hour of their death. The pair forged a sort of cult in that, after them, it was all but expected of a conqueror that he have a favourite horse. Julius Caesar had one; so too did the eccentric Roman Emperor Caligula, who made a great fuss of his horse Incitatus, holding birthday parties for him, riding him while adorned with Alexander's breastplate, and planning to make him a consul.>>

(Hey, I thought you didn't care when Shakespeare died, since he wasn't the real Shakespeare anyway?)

A while back Chris Peterson said that time didn't matter when I mentioned the past tense nature of astronomical observation. Yet in the foregoing discussion, events subsequent to the emission of discernible Lagoon Nebula are referred to by Ann et al. If these Earthly occurrences are noteworthy then why are the changes in the Lagoon during the past 4 or 5 thousand years not of primary concern? Speculative science is just that one might suppose.
Top

Shakespeare and Cervantes both died on the same day?

(Hey, I thought you didn't care when Shakespeare died,
since he wasn't the real Shakespeare anyway?)

I care about the authorship question and all the legends that surround it.

Shakespeare & Cervantes both lack the modern scientific evidence we have for Santa:

https://en.wikipedia.org/wiki/NORAD_Tracks_Santa wrote:
<<NORAD Tracks Santa is an annual Christmas-themed program that occurs on December 24 and has existed since 1955. It is a community outreach function of the North American Aerospace Defense Command (NORAD). Every year on Christmas Eve, NORAD tracks Santa Claus leaving the North Pole as he journeys around the world on his mission to deliver presents to children.>>

Why would any government lie about this sort of thing

DL MARTIN wrote: ↑
Mon Nov 04, 2019 7:53 pm
A while back Chris Peterson said that time didn't matter when I mentioned the past tense nature of astronomical observation. Yet in the foregoing discussion, events subsequent to the emission of discernible Lagoon Nebula are referred to by Ann et al. If these Earthly occurrences are noteworthy then why are the changes in the Lagoon during the past 4 or 5 thousand years not of primary concern? Speculative science is just that one might suppose.

I didn't say that time doesn't matter. I said that the time-of-flight associated with the distance to the object doesn't matter. We look at the temporal evolution of a great many things in space. What we observe is not in any way dependent upon the distance of these objects from the Earth. We base our timeline on the time of observation, not the time inferred from some estimate of distance.
Chris