Explanation: Supergiant star Gamma Cygni is at the center of the Northern Cross. Near the plane of our Milky Way galaxy, that famous asterism flies high in northern summer night skies in the constellation Cygnus the Swan. Known by the proper name Sadr, Gamma Cygni also lies just below center in this telescopic skyscape, with colors mapped from both broadband and narrowband image data. The field of view spans about 3 degrees (six Full Moons) on the sky and includes emission nebula IC 1318 and open star cluster NGC 6910. Filling the upper part of the frame and shaped like two glowing cosmic wings divided by a long dark dust lane, IC 1318's popular name is understandably the Butterfly Nebula. Right of Gamma Cygni, are the young, still tightly grouped stars of NGC 6910. The distance to Gamma Cygni is around 560 parsecs or 1,800 light-years. Estimates for IC 1318 and NGC 6910 range from 2,000 to 5,000 light-years.

gamma-cygni-nebula-and-sadr1024.jpg
Is that a nova right behind Sadr?

or should I
say Gamma-cygnet-and-Sadar? Is Deneb even
bigger?
You do not have the required permissions to view the files attached to this post.
Orin 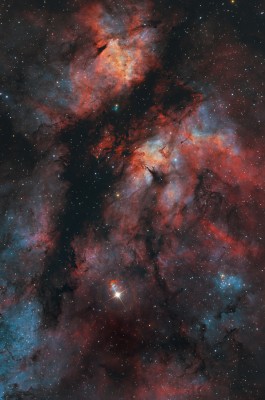 Is that a nova right behind Sadr?

That red and blue thing behind Sadr sure looks strange! But it can't be a nova. There is no way that the editors of APOD would post a picture that contains a new nova and then fail to mention it!

Is Deneb bigger than Sadr? No, it's probably the other way round.

According to the Hipparcos satellite, which measured the parallax of a lot of stars - that is, Hipparcos measured how the stars appeared to move across the sky as the Earth moved in its orbit around the Sun - Sadr is a little farther away than Deneb.

As for parallax, check this out: The objects that are farther away appear to move more slowly than things that are nearby as the train is moving by:

But in the case of Sadr and Deneb, both their parallaxes are so small, and their apparent movement across the sky is so insignificant, that we can't be sure which of the two stars is farther away. But while the jury is certainly still out on this matter, evidence nevertheless suggests that Sadr is farther away.

More importantly, Sadr is considerably cooler than Deneb. If we assume, for the sake of the argument, that Sadr and Deneb are intrinsically about equally bright in visible light, then it follows that Sadr, the cooler star, must be bigger than Deneb. Because the surface brightness is always higher in a hotter star, and the only way for a cooler star to be as intrinsically bright as the hot star is if the cooler star is bigger. 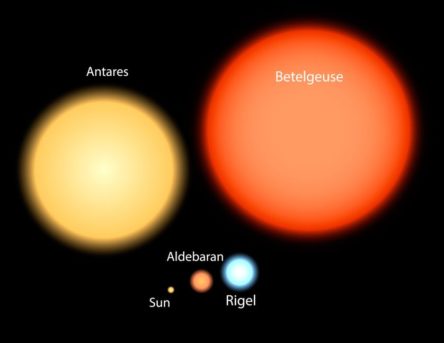 The cooler and brighter a star is, the bigger it must be. Credit: Sorry, I don't know.

But these figures are highly, highly uncertain. 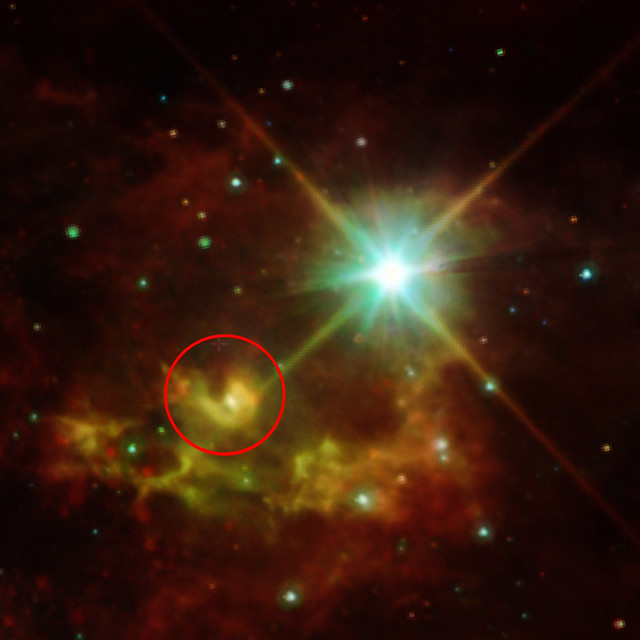 Thank you for those links, AVAO! Yes, it would seem that there is a highly reddened late O or early B-type star embedded in that nebulosity, and that star is the source of the ionization of the nebula.

Wow this is a revelation. Ann wrote that evidence suggests that Sadr is a little farther away than Deneb. Some websites I have seen need updating. Most state that Sadr is around 1,800 ly away while Deneb is some 2,600 ly away. Give or take 200 ly.
Top

091608.jpg
Thanks Ann! This illustration kinda shoes Deneb to seem a little
larger; That is why I asked; yet the write up suggest that Sadr is the
Dominant star! Hmm; looks aren't everything!

This is what Wikipedia says about Sadr:

This is what Wikipedia says about Deneb:

So Wikipedia correctly notes that Sadr has a smaller parallax than Deneb (although both parallaxes are highly uncertain), but then it concludes that the star with the smaller parallax is the one that is closer to us. It is the other way round.

In astronomy, we talk about stars' bolometric luminosity, which is their total luminosity at all wavelengths. But since Sadr is an F8 supergiant type of star, we don't expect its bolometric correction to be very high. That is because the temperature of Sadr is just a little higher than the Sun's, and just like the Sun, its blackbody curve peaks in the visible part of the spectrum. 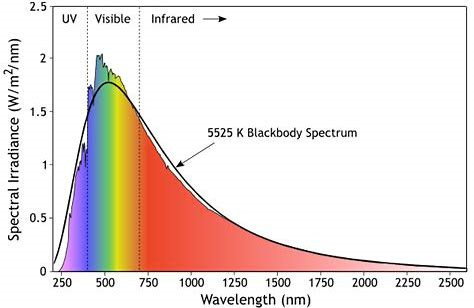 Blackbody curve of the Sun.


The source of the image above is this.

Since the temperature of Sadr is quite similar to that of the Sun, Sadr's blackbody curve will also be similar. A star's V luminosity is its magnitude in yellow-green light, and as you can see, the Sun peaks in blue-green light. To get the Sun's bolometric luminosity, we must add its emission at all other wavelengths.

But, guess what?? I found a figure that suggests that for stars whose temperature is similar to the Sun or a little hotter, we should calculate no bolometric correction!! 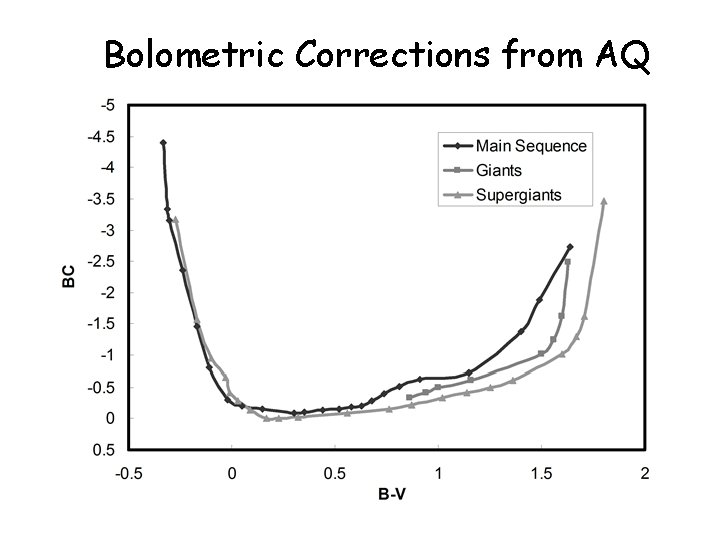 The parallax of Deneb, 2.29 mas, corresponds to a little more than 1,400 light-years, or 437 parsecs. Since its apparent magnitude is 1.25, its absolute magnitude will be -6.95, or 47,529 Suns in V light. And its bolometric correction will be larger than than of Sadr, because Deneb is an early A-type star, which means that its blackbody curve peaks in the ultraviolet part of the spectrum. And frankly Deneb emits more energy per unit of its "surface" than Sadr at all wavelengths. Note how the shape of the blackbody curves change at rising temperatures:


The source of the image above is this. Note that while the temperature of Sadr is ~6,000K, the temperature of Deneb is ~8,500 K. Deneb is nowhere near 12,000 K. Even so, its blackbody curve is most definitely "higher" than Sadr's, and Deneb emits more energy per square unit than Sadr at all wavelengths. So clearly, however we look at it, Deneb is brighter than Sadr if their Hipparcos parallaxes are correct. We don't know that they are.

However, the tentative verdict seems to be:

Yes, Sadr is farther away than Deneb.

Yes, Sadr is a larger star than Deneb.

But no, Sadr is not brighter than Deneb. Deneb is brighter.