The Tulip and Cygnus X-1

Explanation: Framing a bright emission region, this telescopic view looks out along the plane of our Milky Way Galaxy toward the nebula rich constellation Cygnus the Swan. Popularly called the Tulip Nebula, the reddish glowing cloud of interstellar gas and dust is also found in the 1959 catalog by astronomer Stewart Sharpless as Sh2-101. Nearly 70 light-years across, the complex and beautiful Tulip Nebula blossoms about 8,000 light-years away. Ultraviolet radiation from young energetic stars at the edge of the Cygnus OB3 association, including O star HDE 227018, ionizes the atoms and powers the emission from the Tulip Nebula. Also in the field of view is microquasar Cygnus X-1, one of the strongest X-ray sources in planet Earth's sky. Blasted by powerful jets from a lurking black hole its fainter bluish curved shock front is only just visible though, beyond the cosmic Tulip's petals near the right side of the frame.

What I find most surprising about the APOD is actually the blue outflows from the ionizing star inside the Tulip Nebula, HD 227018, an O6.5V-type star. Offhand, I can't remember seeing such outflows from any O-type star before in an RGB-Hα-OIII image. You can see that in Peter Kohlmann's first version of his image, the blue outflows from HD 227018 are not quite so visible, but they are still there. I'd say that the color is most likely a combination of OIII and reflected blue starlight.

HD 227018 is clearly very young, since it is still surrounded by all that red nebulosity with dark dust lanes, but I guess that the star might possibly, possibly be in the process of turning itself into a Wolf-Rayet star. These are hot massive aging stars characterized by enormous outflows and tremendous mass loss. 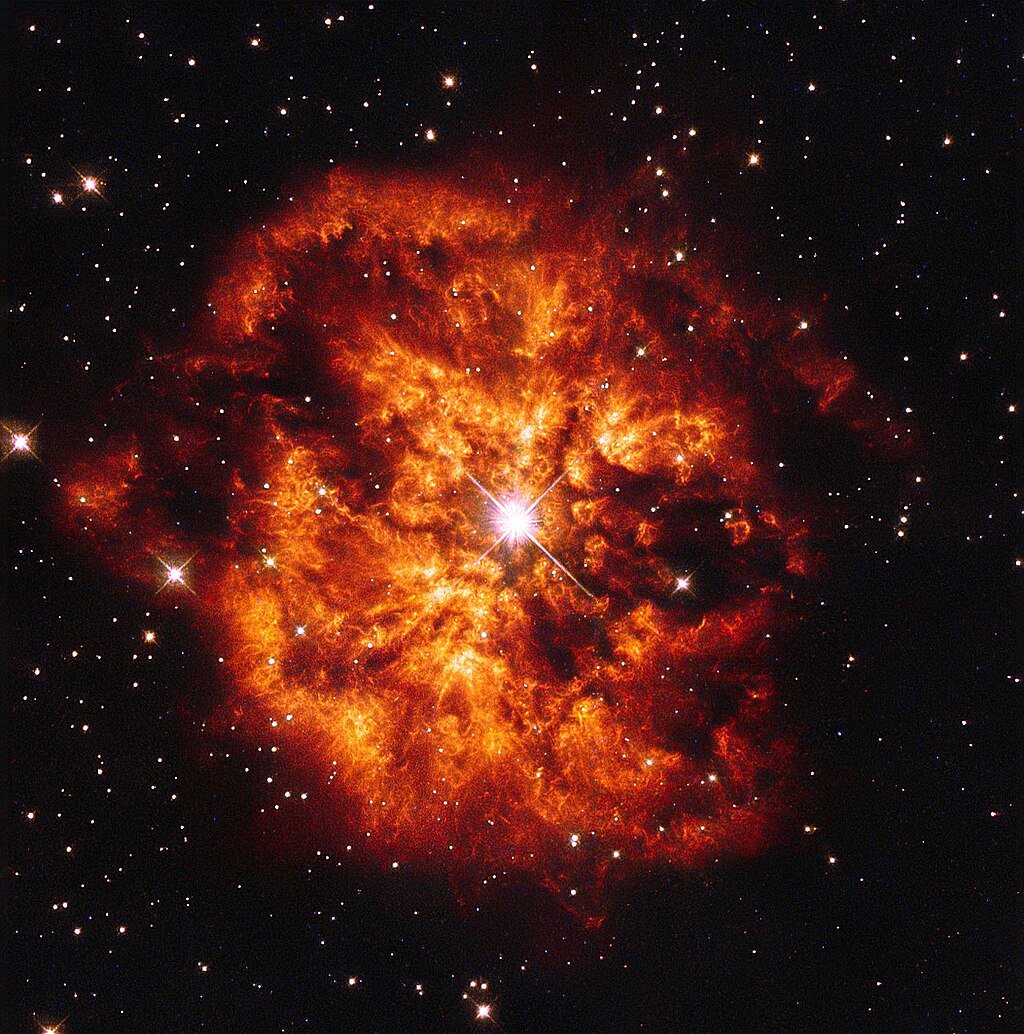 Wolf-Rayet star WR 124, surrounded by nebula M1-67 that has been created by the star's own mass loss. Image: ESA/Hubble.


Fascinatingly and almost incredibly (to me), today's APOD shows another, much fainter star below (south of) HD 227018 that appears to blow its own gaseous outflow of blue!! I have no explanation for that at all!

Unless it is a massive baby star in the process of forming that just released an absolutely tremendous stellar burp? 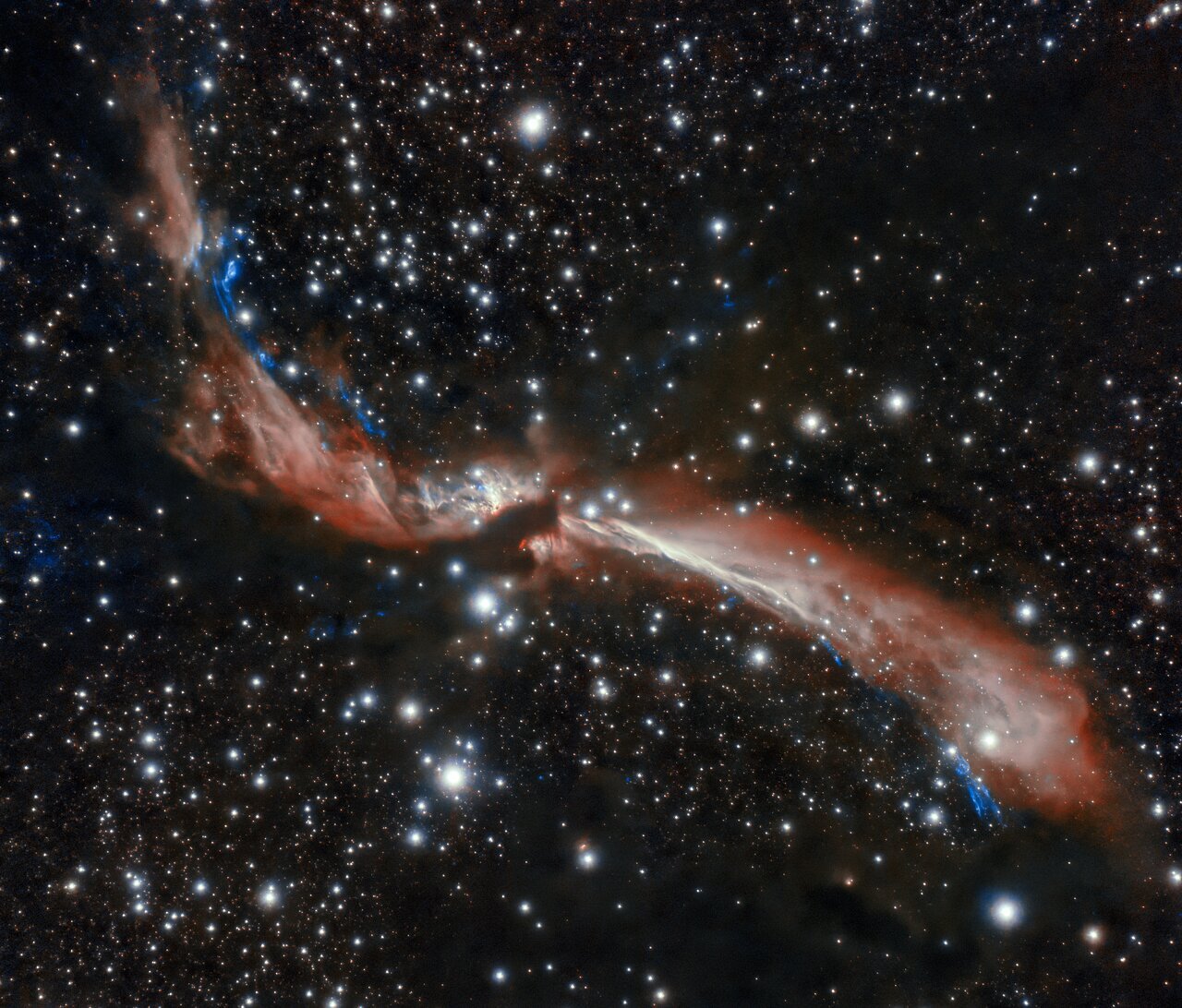 Jets emitted by young stars in the process of forming. Image: Gemini South.


The large blue arc at lower right in the APOD, blown by the micro-quasar in Cygnus X-1, is obviously dominated by OIII emission. I highly recommend the wonderfully informative Cygnus X-1 APOD from June 8, 2009 - a birthday APOD for me, although I could have asked for more blue hues in my birthday gift!

Anyway, Steve Cullen's APOD really gives us a tantalizing suggestion of what might be going on in and around Cygnus X-1, although the black hole itself, the singularity, is, as always, hidden from our view.


cygx1bubble_cullen_annotated[1].jpg
Possible Jet Blown Shells Near Microquasar Cygnus X-1.
Credit & Copyright: Steve Cullen (lightbuckets.com)
Ann
You do not have the required permissions to view the files attached to this post.
Color Commentator
Top

TulipCygX-1.jpg
Beware lil tulip; Cygnus X is snacking!
IC59IC63crawford600h.jpg
Gonna save this one for a Halloween background!