ALMA: Unprecedented Views of the Birth of Planets

ALMA: Unprecedented Views of the Birth of Planets

Astronomers have already cataloged nearly 4,000 exoplanets in orbit around distant stars. Though we have learned much about these newfound worlds, there is still much we do not know about the steps of planet formation and the precise cosmic recipes that spawn the wide array of planetary bodies we have already uncovered, including so-called hot Jupiters, massive rocky worlds, icy dwarf planets, and – hopefully someday soon – distant analogs of Earth.

To help answer these and other intriguing questions about the birth of planets, a team of astronomers using the Atacama Large Millimeter / submillimeter Array (ALMA) has conducted one of the deepest surveys ever of protoplanetary disks, the planet-forming dust belts around young stars. ...

Known as the Disk Substructures at High Angular Resolution Project (DSHARP), this Large Program of ALMA has yielded stunning, high-resolution images of 20 nearby protoplanetary disks and given astronomers new insights into the variety of features they contain and the speed with which planets can emerge. ...


The Disk Substructures at High Angular Resolution Project (DSHARP):
Know the quiet place within your heart and touch the rainbow of possibility; be
alive to the gentle breeze of communication, and please stop being such a jerk. — Garrison Keillor
Top 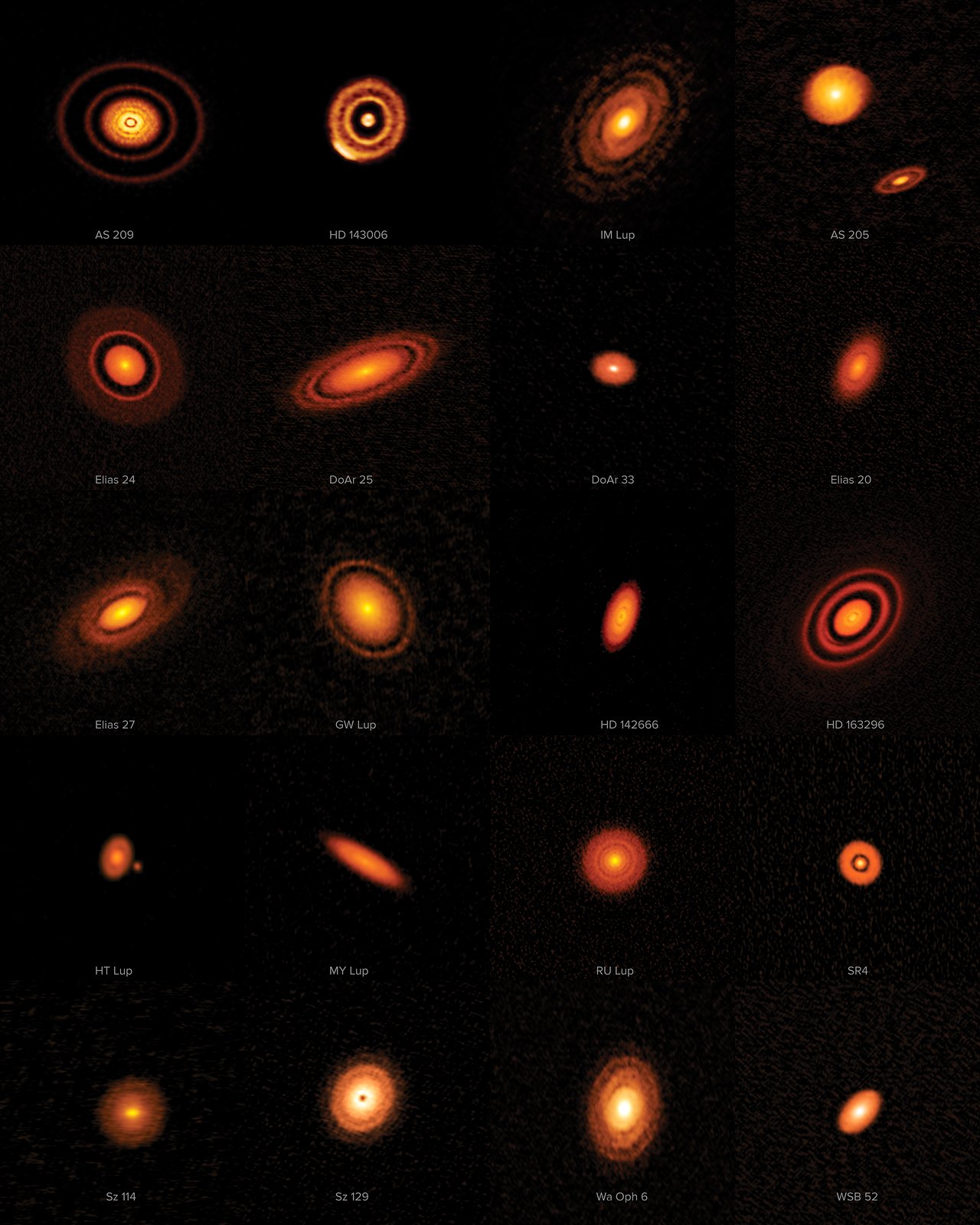 This week’s image shows 20 spectacular protoplanetary discs captured by ALMA’s first Large Program, known as the Disk Substructures at High Angular Resolution Project (DSHARP). In a focused observation effort that included hours of data collected over several months, researchers imaged 20 nearby protoplanetary discs to learn more about the earliest stages of planet formation, and the staggering quantity of data from the project has just been released.

It has long been thought that planetary systems are likely to have their origins in so-called protoplanetary discs — compressed circles, spirals or ellipses of gas and dust, which form around protostars in the early stages of their development. The process by which planets emerge from these diffuse discs, however, is not well understood. It is particularly challenging to understand the very earliest stages of their evolution — when dust within a disc coalesces into planetesimals and the seeds of planets are formed.

Astronomers know that a planet’s first growth spurt, from individual grains to a body a few kilometres across, must happen quickly in astronomical terms, but the lack of observational data has made pinning down the physics of this growth challenging. Fortunately, this recently changed with the opening of new telescopes such as ALMA.

Eventually, astronomers hope to be able to accurately predict what type of planetary system will evolve from any particular disc. The DSHARP program takes us a step towards this goal by providing a detailed view of the substructures (the varied patterns of dark and light circles and spirals you can see in each disc) — helping us to understand their significance.

The story continues next week — this is the first instalment in a trio of Pictures of the Week that will delve into recent discoveries made by DSHARP.