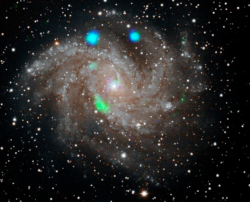 
The most powerful X-ray sources we know of are accreting black holes. These black holes are powered by the accretion of matter from their surroundings. This material might be pulled off a neighboring star by a "small", stellar-mass black hole in a compact binary system, or might be giant clouds of gas, dust and stars swallowed by a supermassive black hole at the center of an active galaxy. In either case, the process is pretty much the same: as material swirls towards the event horizon of the black hole, it forms a hot accretion disk which emits enormous amounts of high energy X-ray radiation. The force of this radiation is so powerful that it can limit the amount of accreting material, and if too much radiation is produced, it acts like a shut-off valve. Thus, there should be a maximum amount of radiation that an accreting black hole system can emit. In recent years, astronomers have identified a mysterious class of objects which have characteristics of accreting compact objects but seem to be much brighter than this limit. These sources are called Ultra-Luminous X-ray sources, or ULXs for short. The nature of these strange sources is not fully understood yet. Some ULXs seem to be accreting neutron stars, where the observed X-rays probably originate from a narrow particle beam from the neutron star. Other ULXs have been suggested to be so-called "intermediate mass" black holes, black holes with masses of a thousand suns or more, perhaps transitional objects between the stellar-mass and supermassive varieties. The image above shows an optical image of the Fireworks galaxy. The bright blue and green dots superimposed on the image show the locations of bright sources of high-energy X-ray emission from ULXs, as seen by the NuSTAR space observatory. The spot shown in green is emission from a surprising source that suddenly appeared during the NuSTAR observations. The nature of the "Green ULX" is not known exactly. Perhaps this sudden brightening is due to the catastrophic accretion of a large quantity of material by a black hole or neutron star. Perhaps a black hole swallowed its companion star?


NuSTAR Spots a Mystery That's Gone in a Flash
viewtopic.php?t=39768 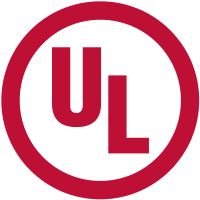 <<Underwriters Laboratories Inc. was founded in 1894 by William Henry Merrill. Early in his career as an electrical engineer in Boston, a 25-year-old Merrill was sent by underwriters issuing fire insurance to assess risk, and investigate the 1893 World's Columbian Exposition's Palace of Electricity in Chicago. In order to determine and mitigate risk, Merrill found it necessary to conduct tests on building materials. Upon seeing a growing potential in his field, Merrill stayed in Chicago to found Underwriters Laboratories. UL published its first standard, "Tin Clad Fire Doors", in 1903. In 1905, UL established a Label Service for certain product categories that require more frequent inspections. In 1906, UL introduced the UL Mark to indicate products that had passed their testing.>>

<<Nikola Tesla, at the 1893 World's Columbian Exposition, demonstrated a device he constructed known as the "Egg of Columbus". It was used to demonstrate and explain the principles of the rotating magnetic field model and the induction motor. It was also used to rotate armatures at great distances and speeds in the first demonstration of wireless power transfer.

Tesla's Egg of Columbus performed the feat of Columbus with a copper egg in a rotating magnetic field. The egg spins on its major axis, standing on end due to gyroscopic action. Tesla's device used a toroidal iron core stator on which four electromagnetic coils were wound. The device was powered by a two-phase alternating current source (such as a variable speed alternator) to create the rotating magnetic field. The device operated on a frequency of 25 to 300 hertz. The ideal operating frequency was described as being between 35 and 40 hertz.

Reproductions of the device are displayed at the Nikola Tesla Museum in Belgrade, the Memorial Centre "Nikola Tesla" in Smiljan, the Technical Museum in Zagreb, the Croatian History Museum in Zagreb, in the Ann Arbor Hands-On Museum and the Tesla Science Center at Wardenclyffe in Shoreham, NY. >>

https://en.wikipedia.org/wiki/Egg_of_Columbus wrote:
<<An egg of Columbus or Columbus' egg (Italian: uovo di Colombo) refers to a brilliant idea or discovery that seems simple or easy after the fact. The expression refers to an apocryphal story, dating from at least the 15th century, in which it is said that Christopher Columbus, having been told that discovering the Americas was inevitable and no great accomplishment, challenges his critics to make an egg stand on its tip. After his challengers give up, Columbus does it himself by tapping the egg on the table to flatten its tip. The Columbus story may have originated with Italian historian and traveler Girolamo Benzoni. In his book History of the New World, published in 1565, he wrote: Columbus being at a party with many noble Spaniards, where, as was customary, the subject of conversation was the Indies: one of them undertook to say: —"Mr. Christopher, even if you had not found the Indies, we should not have been devoid of a man who would have attempted the same that you did, here in our own country of Spain, as it is full of great men clever in cosmography and literature." Columbus said nothing in answer to these words, but having desired an egg to be brought to him, he placed it on the table saying: "Gentlemen, I will lay a wager with any of you, that you will not make this egg stand up as I will, naked and without anything at all." They all tried, and no one succeeded in making it stand up. When the egg came round to the hands of Columbus, by beating it down on the table he fixed it, having thus crushed a little of one end; wherefore all remained confused, understanding what he would have said: that after the deed is done, everybody knows how to do it; that they ought first to have sought for the Indies, and not laugh at him who had sought for it first, while they for some time had been laughing, and wondered at it as an impossibility.

The factual accuracy of this story is called into question by its similarity to another tale published fifteen years earlier (while Benzoni was still traveling in the Americas) by painter and architect Giorgio Vasari. According to Vasari, the young Italian architect Filippo Brunelleschi had designed an unusually large and heavy dome for Santa Maria del Fiore in Florence, Italy. City officials had asked to see his model, but he refused, proposing instead: That whosoever could make an egg stand upright on a flat piece of marble should build the cupola, since thus each man's intellect would be discerned. Taking an egg, therefore, all those Masters sought to make it stand upright, but not one could find a way. Whereupon Filippo, being told to make it stand, took it graciously, and, giving one end of it a blow on the flat piece of marble, made it stand upright. The craftsmen protested that they could have done the same; but Filippo answered, laughing, that they could also have raised the cupola, if they had seen the model or the design. And so it was resolved that he should be commissioned to carry out this work. When the church was finally built it had the shape of half an egg slightly flattened at the top.

Mary Shelley mentions Columbus's egg in her Introduction to the Third Edition of Frankenstein (1869, p. 10), writing "In all matters of discovery and invention, even of those that appertain to the imagination, we are continually reminded of the story of Columbus and his egg. Invention consists in the capacity of seizing on the capabilities of a subject, and in the power of moulding and fashioning ideas suggested to it." Adolf Hitler used the metaphor in Mein Kampf, saying that "Examples of The Columbus Egg lie around us in hundreds of thousands; but observers like Columbus are rare." Leo Tolstoy mentions Columbus’ egg in War and Peace after Helene explains to her spiritual guide her reasoning as to why she is not bound by her previous vows of marriage to Pierre after switching religions. "The spiritual guide was astonished at this solution, which had all the simplicity of Columbus’ egg." F. Scott Fitzgerald refers to Columbus' egg in The Great Gatsby when describing the topography of the fictional East and West eggs: "They are not perfect ovals - like the egg in the Columbus story, they are both crushed flat at the contact end - but their physical resemblance must be a source of perpetual wonder to the seagulls that fly overhead.">>