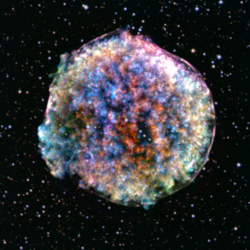 
Life in our Galaxy depends on the deaths of stars. Stars are chemical factories, building up important, complex atoms from simpler ones through a process of thermonuclear fusion which occurs at the star's center, which supports and powers the star through the conversion of matter into energy. Stars die once the fuel in the star's center is used up. When low mass stars (like our Sun) die, they leave behind white dwarf stars, incredibly dense balls of carbon and oxygen. White dwarfs are ticking time bombs: if they accrete enough matter (from a companion star, say, or from the interstellar medium) they can be pushed over a fundamental physical limit and can catastrophically collapse, instantaneously igniting their carbon into a sudden thermonuclear explosion called a supernova. A single supernova explosion can be nearly as powerful as the combined energy released by an entire galaxy of stars, and the explosion distributes the chemicals cooked up by the star during its lifetime. New, even more complex chemicals are created in the process as well. Thus the host galaxy gets enriched with chemicals that form molecules needed to produce dust, dirt, planets and life. The broad strokes of this process are understood but the details are still mysterious. The image above is a deep X-ray exposure by the Chandra X-ray Telescope of the Tycho Supernova remnant, the enriched gas and dust expelled from a star which was observed to explode in 1572 by the notorious astronomer Tycho Brahe, among others. The colors represent different X-ray energies featuring emission from different, hot, highly charged atoms. The hot, X-ray emitting gas is very clumpy, not smooth as might be expected from a nearly spherical explosion. A new study of this image suggests that these clumps are an intrinsic part of the initial explosion, rather than resulting from later interactions of the ejected material with the ambient material surrounding the explosion.


CXC: The Clumpy and Lumpy Death of a Star
viewtopic.php?t=39930