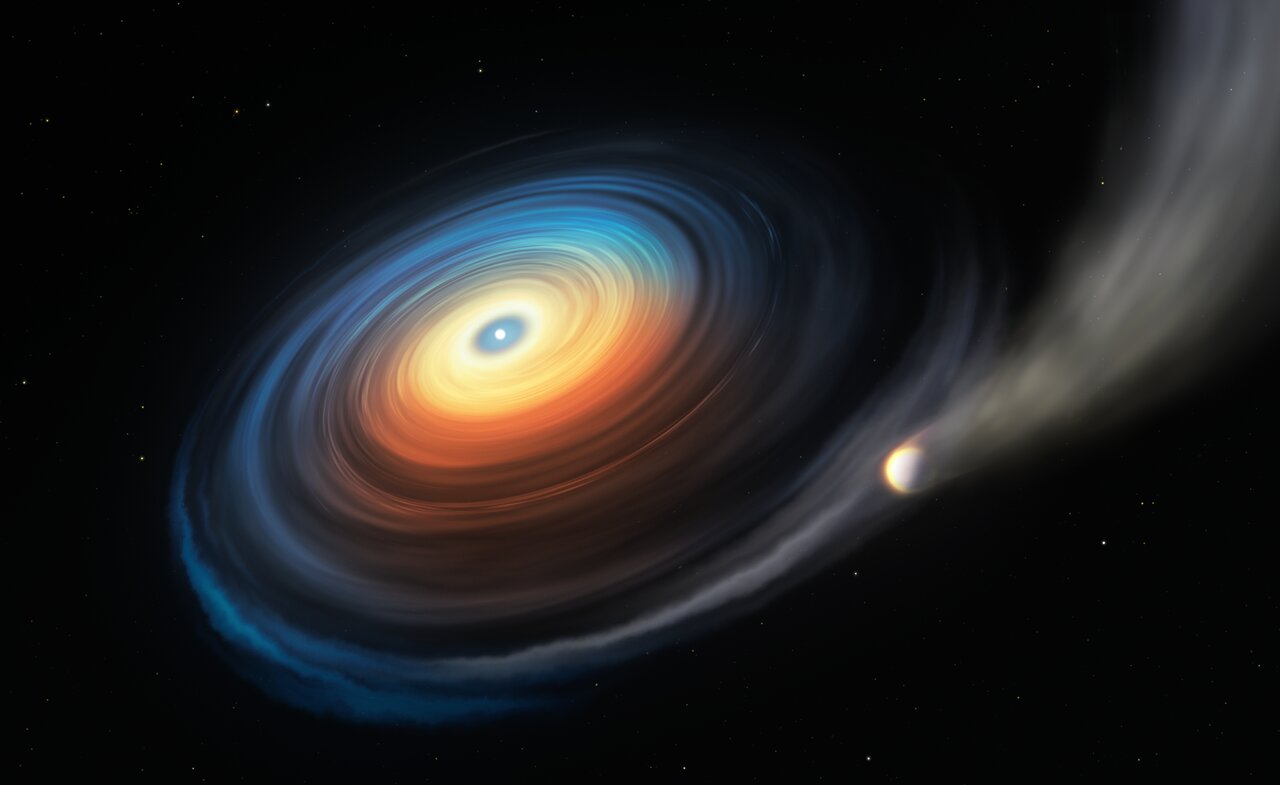 Artist’s impression of the WDJ0914+1914 system ~ Credit: ESO/M. Kornmesser Illustration shows the white dwarf WDJ0914+1914 and its Neptune-like exoplanet. Since the icy giant orbits the hot white dwarf at close range, the extreme ultraviolet radiation from the star strips away the planet’s atmosphere. While most of this stripped gas escapes, some of it swirls into a disc, accreting onto the white dwarf.

The first evidence of a giant planet orbiting a dead white dwarf star has been found in the form of a disc of gas formed from its evaporating atmosphere.

The Neptune-like planet orbits a star a quarter of its size about once every ten days, leaving a comet-like tail of gas comprised of hydrogen, oxygen and sulphur in its wake.

The discovery ... is the first evidence of a giant planet orbiting a white dwarf star and suggests that there could be many more planets around such stars waiting to be discovered.

Until now, there has never been evidence of a planet that has survived a star’s transition to a white dwarf.

The star WD J0914+1914 was identified in a survey of ten thousand white dwarfs observed by the Sloan Digital Sky Survey. Scientists at Warwick analysed subtle variations in the light emitted from the system to identify the elements present around the star.

They detected very minute spikes of hydrogen in the data, which was unusual in itself, but also of oxygen and sulphur, which they had never seen before. Using the Very Large Telescope of the European Southern Observatory in Chile to obtain more observations of this star, they found that the shape of the hydrogen, oxygen and sulphur features are typical indicators of a ring of gas. ...

Accretion of a Giant Planet onto a White Dwarf Star ~ Boris T. Gänsicke et al Cold Giant Planets Evaporated by Hot White Dwarfs ~ Matthias R. Schreiber et al
Know the quiet place within your heart and touch the rainbow of possibility; be
alive to the gentle breeze of communication, and please stop being such a jerk. — Garrison Keillor
Top
1 post • Page 1 of 1