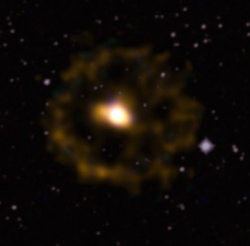 
Supernovae come in two flavors: Type I and Type II. Type I supernovae are produced by the near instantaneous thermonuclear combustion of white dwarf stars suddenly pushed beyond their limits by the accretion of matter (probably stolen from a companion star). Type II supernovae are explosions produced in stars about 10 times the mass of the sun (or much more) after the star's core runs out of thermonuclear fuel and collapses, causing the star to blow itself apart. Such core-collapse supernovae are important progenitors of collapsed objects, like neutron stars and black holes, and they also help seed their host galaxies with important chemicals needed for the existence of planets and people. Studying the youngest neutron stars, those produced within the last few centuries, helps scientists understand how a supernova explosion modifies its local environment. A very interesting young neutron star is found in G11.2-0.3, the remnant of a Type II supernova that exploded within the last 2000 years or thereabouts. The image above is a high-energy, hard X-ray image of G11.2-0.3 taken with the NuSTAR X-ray observatory. The NuSTAR image shows a nearly symmetric ring of emission, produced by the spherical blast wave generated by the stellar explosion. At the center of this ring lies an X-ray bright, rapidly spinning neutron star, which makes about 16 revolutions per second, pulsing in X-rays. Surrounding this pulsar is a "wind" of X-ray emitting particles, accelerated somehow by the extremely strong magnetic field of the spinning neutron star, which streams out into space, forming a "pulsar wind nebula". NuSTAR is unique in that it images both the lower-energy X-ray emission produced by hot, shocked gas in the system, and also the much higher energy emission produced by electrically-charged bits of atoms accelerated by shocks and by the pulsar's magnetism. The NuSTAR observations strengthen the idea that the strong shocks near these young supernova remnants produce the most energetic galactic cosmic rays we've detected in the Universe.