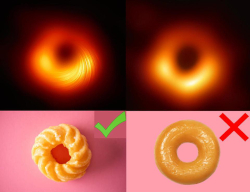 
When it comes to black holes, what goes in does not come out (we think). Black holes grow by accretion of material around them, gaining more and more mass as they swallow more and more matter. We think this matter does not fall straight in; rather, it swirls around the black hole as it spirals down through the black hole's event horizon, much like water flowing down a drain. This process was imaged for the first time by the Event Horizon Telescope, a massive scientific collaboration which was able to detect the shadow of the black hole at the center of the galaxy M87, a shadow surrounded by a donut-shaped ring of matter glowing in radio waves. The EHT however did not just image the black hole's shadow; it also measured the polarization of the radio emission. Polarization of an electromagnetic wave like light or the radio waves observed by EHT is a measure of the tilt of the plane of oscillation of the electomagnetic wave. The image above shows, at the top right, the now-famous image of the shadow of M87's black hole at the center of the glowing ring of radio emission seen by the EHT. At the upper left is an enhanced black hole image derived after careful analysis by the EHT team of the polarization of the radio waves from the matter surrounding M87's black hole. The polarization analysis traces out the curved lines shown in the image, which follow the inferred direction of the magnetic field threading through the glowing matter near the black hole: a cruller more than a donut, as others have noted. These measurements help to provide an estimate of the strength of the magnetic field near the black hole, showing that it's surprisingly weak, only about 30 times the strength of the earth's magnetic field, or less. The analysis may also help to explain the magnetic origins of the enormous jet escaping from the black hole.

https://en.wikipedia.org/wiki/Cruller wrote:
Click to play embedded YouTube video.
<<The name cruller comes from the early 19th-century Dutch kruller, from krullen 'to curl'. In northern Germany they are known as hirschhörner ('deer horns'). They are traditionally baked on New Year's Eve as a family project, with the kids doing the labor-intensive shaping and the grown-ups handling the deep fat frying. In Danish they are known as klejner and in Swedish as klenäter, both names deriving from Low German.

In the US, various shapes of pastries are known as "crullers". Some forms of those crullers are what is traditionally eaten in Germany and some other European countries on Shrove Tuesday, to use up fat before Lent. In 1909 a US author published her belief that crullers were invented in the New World in 1617 by Sebastian Croll, due to the perceived similarity of the names according to her.

Dorothy in The Wizard of Oz sings "Over the Rainbow" early in the movie holding what's left of a cruller Aunt Em had offered to her after giving them to Hunk, Hickory, and Zeke, her "three shiftless farmhands". The twisted shape of the cruller might have been a metaphor for tornadoes as the same scene references other metaphors which influenced Dorothy's subsequent dream.>>