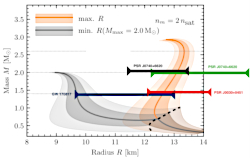 
One of the principal outstanding problems in modern physics is the state of matter at densities at extreme densitiies exceeding that of an atomic nucleus. Theories range from normal nucleonic matter to exotic states impossible to reproduce in laboratories on earth. This extreme matter only exists in a stable form deep inside neutron stars, the burnt-out, collapsed centers of stars more massive than about 10 times the mass of the Sun. Constraining the properties matter in this weird state using observations of neutron stars is one of the key science goals of the Neutron Star Interior Composition Explorer, or NICER, mission on the International Space Station. Because the relationship between a neutron star's mass and radius is determined by the state of matter in its core, observations of the exteriors of neutron stars can constrain the properties of ultra-dense matter by determining the relation between a neutron star's size and its mass. Using sensitive measures of the variations of X-rays emitted by million-degree hot spots on the surface of rapidly spinning neutron stars called pulsars, NICER can precisely measure both the size and mass of the pulsar and thus constrain the state of matter in the hidden interior. In 2019, the first set of NICER neutron star mass-radius and dense matter constraints was published for the nearby millisecond pulsar PSR J0030+0451. Now a new measurement of the radius of a pulsar known as PSR J0740+6620 by NICER, announced by the NICER team at the April 2021 Meeting of the American Physical Society, provides the best constraints so far on the nature of the neutron star interior. PSR J0740+6620 has the highest neutron star mass known, over twice the mass of our Sun. Using extensive observations of PSR J0740 with NICER, augmented by X-ray imaging observations using ESA's XMM-Newton telescope, the NICER team derived a radius of PSR J0740 in excess of 11 kilometers (about the radius of the Washington DC beltway), as shown by the green and brown horizontal bars in the mass-radius plot above. This radius range is consistent with the radius range derived for PSR J0030, even though PSR 0740 is 30% more massive. For comparison, the radius range derived by the LIGO and Virgo gravitational wave observatories from observing the gravitational radiation produced by the neutron-star merger event GW 170817 is shown by the dark blue bar in the plot. The shaded areas show theoretical predictions for two different models of neutron star interiors, a "squishy" one in gray which results in smaller, higher-density neutron stars, and a "stiff" one, in which the high density matter is better able to withstand the crushing force of gravity, resulting in larger, less dense neutron stars. The NICER observations support the stiff model.

Click to play embedded YouTube video.
Credit: NASA/GSFC/USRA/Goddard Media Studios
Music: "Question Time" from Universal Production Music
Matter in the hearts of neutron stars ­– dense remnants of exploded massive stars – takes the most extreme form we can measure. Now, thanks to data from NASA’s Neutron star Interior Composition Explorer (NICER), an X-ray telescope on the International Space Station, scientists have discovered that this mysterious matter is less squeezable than some physicists predicted.

The finding is based on NICER’s observations of PSR J0740+6620 (J0740 for short), the most massive known neutron star, which lies over 3,600 light-years away in the northern constellation Camelopardalis. J0740 is in a binary star system with a white dwarf, the cooling remnant of a Sun-like star, and rotates 346 times per second. Previous observations place the neutron star’s mass at about 2.1 times the Sun’s.

"We're surrounded by normal matter, the stuff of our everyday experience, but there’s much we don’t know about how matter behaves, and how it is transformed, under extreme conditions,” said Zaven Arzoumanian, the NICER science lead at NASA’s Goddard Space Flight Center in Greenbelt, Maryland. “By measuring the sizes and masses of neutron stars with NICER, we are exploring matter on the verge of imploding into a black hole. Once that happens, we can no longer study matter because it’s hidden by the black hole’s event horizon." ...


New measurements force scientists to reconsider models of neutron star cores
University of Maryland | College of Computer, Mathematical, and Natural Sciences | 2021 Apr 19
Know the quiet place within your heart and touch the rainbow of possibility; be
alive to the gentle breeze of communication, and please stop being such a jerk. — Garrison Keillor
Top
2 posts • Page 1 of 1