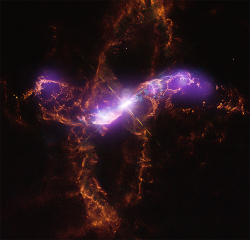 
Biologists use the term "symbiotic" (from the Greek, meaning "living together") to describe well established, long-lasting, life-changing relationships between two different organisms. Symbiotic relations can be mutually beneficial, helping both organisms thrive. The classic example of a mutually-beneficial symbiotic relationship is that between the clownfish and the poisonous sea anemone: the clownfish provides the anemone with nutrients, while the anemone provide the clownfish with protection from predators. Or they can have a darker side, where one organism benefits and the other is harmed, like the relation between parasite and host. Stars have symbiotic relationships too. Symbiotic stars are parasitic binary systems composed of an evolved red giant star bound together with a dead, compact companion, often a white dwarf or sometimes an even more compact neutron star. Gas from the red giant falls upon the compact object, is crushed by the strong gravity and heated, finally igniting in a thermonuclear blast by conversion of hydrogen into helium. This rejuvenates the dead star for awhile, and it once again produces energy (but this time unstably on the surface of the star, rather than the stable nuclear burning that occurred in the star's core during it main-sequence lifetime). The variable star R Aquarii is an intriguing example of stellar symbiosis where the history of past outbursts can still be seen as surprising, spectacular structures surrounding the star. The image above is a composite optical and X-ray image of R Aqr. The optical image (in red, taken by the Hubble Space Telescope) shows the large, cool, dense structures (about a light-year across) created by earlier outbursts. X-ray images (in blue, from the Chandra X-ray Observatory) reveal jet-like blobs of extremely hot gas produced by more recent outbursts as million mile per hour shrapnel from the blast slams into slower moving gas near the star. The ability to view evidence of past outbursts along with more recent eruptions enables scientists to understand how mass is transferred from the red giant to the white dwarf and how the eruptions happen, and how these processes change with time.