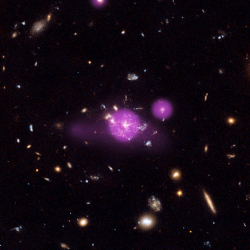 
Galaxy clusters are the largest identifiable objects in the Universe. These clusters contain dozens or hundreds of galaxies held together by the gravitational pull of their own dark matter. They form the strands that compose the cosmic web. But where do these strands come from? Looking back in time to the distant Universe, astronomers have identified clusters that are in the process of formation. But recognizing distant protoclusters in visible-band images can be challenging, since it can be hard to clearly identify cluster member galaxies from background or foreground galaxies (or even stars). X-ray observations can help identify member galaxies by detecting X-ray emission from supermassive accreting black holes in cluster member galaxies. The image above is an 8-day long Chandra X-ray Observatory observation showing the "Spiderweb" galaxy and its surroundings. The"Spiderweb" is an active galaxy which formed when the Universe was only about one-quarter of its current age. It contains an actively feeding supermassive black hole which powers radio-emitting charged particle jets stretching far into space. The X-ray image, shown in purple, is superimposed on optical images from the Hubble Space Telescope and the 27-foot wide Subaru telescope in Hawaii. The X-rays help pinpoint the location of actively feeding supermassive black holes that lie at the centers of 14 of the galaxies in the protocluster - an unusually large number. These observations help us understand how sticky strands of gravity in clusters in the early Universe like the "Spiderweb" trap wandering galaxies to form the large galaxy clusters we see around is, and power the growth of supermassive black holes. 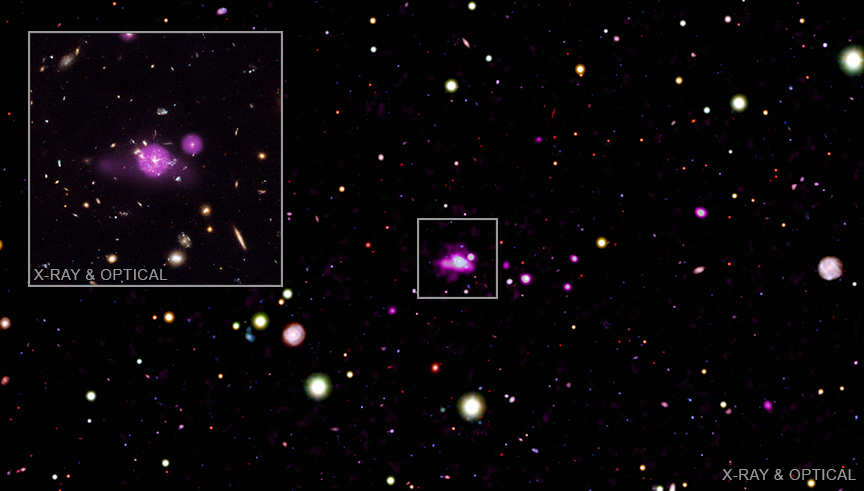 Often, a spiderweb conjures the idea of captured prey soon to be consumed by a waiting predator. In the case of the "Spiderweb" protocluster, however, objects that lie within a giant cosmic web are feasting and growing, according to data from NASA's Chandra X-ray Observatory.

The Spiderweb galaxy, officially known as J1140-2629, gets its nickname from its web-like appearance in some optical light images. This likeness can be seen in the inset box where data from NASA's Hubble Space Telescope shows galaxies in orange, white, and blue, and data from Chandra is in purple. Located about 10.6 billion light years from Earth, the Spiderweb galaxy is at the center of a protocluster, a growing collection of galaxies and gas that will eventually evolve into a galaxy cluster.

To look for growing black holes in the Spiderweb protocluster a team of researchers observed it for over eight days with Chandra. In the main panel of this graphic, a composite image of the Spiderweb protocluster shows X-rays detected by Chandra (also in purple) that have been combined with optical data from the Subaru telescope on Mauna Kea in Hawaii (red, green, and white). The large image is 11.3 million light years across. ...


The 700 ks Chandra Spiderweb Field I: Evidence for
Widespread Nuclear Activity in the Protocluster ~ Paolo Tozzi et al
Know the quiet place within your heart and touch the rainbow of possibility; be
alive to the gentle breeze of communication, and please stop being such a jerk. — Garrison Keillor
Top
2 posts • Page 1 of 1