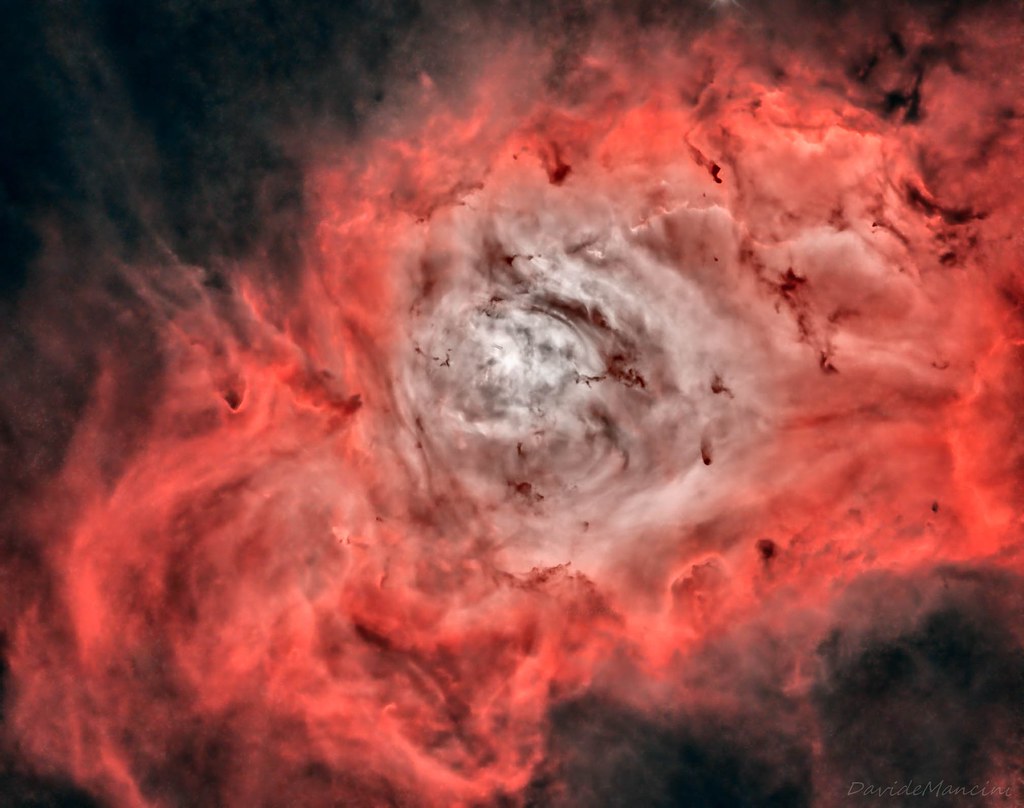 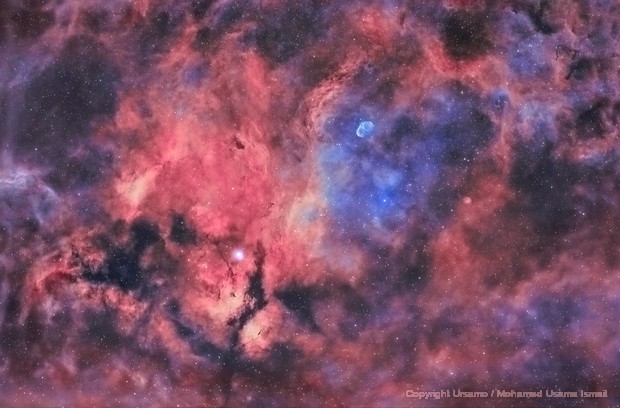 Full info @ https://www.kinchastro.com/m5-star-cluster.html
You do not have the required permissions to view the files attached to this post.
Top

It wasn't the meteor storm of a lifetime but was still a decent show.

In the early morning of the 31st, after hiking around Pinnacles National Park shooting meteors over Bear Gulch Reservoir, and then shooting a Milky Way Panorama, I returned to the campground and only had an hour or so of dark skies left. I set up my Canon Eos Ra (factory modified) on the Skywatcher Star Adventurer and pointed towards the constellation Cygnus in the Milky Way (with the North American Nebula at the bottom of the frame and the Sadr region at the top of the frame) and took 1-minute exposures. This is a single exposure captured at 3:14 am (well after the predicted peak of 10 PM PDT, 5 am UTC 31 May).  I'll probably stack all the frames later, but there is something romantic about a single exposure with a meteor for me. 85mm Rokinon Special Edition, f/2.8, ISO1600, 60",   I have set up my 85mm lens on a tracker several times during meteor showers and have only caught a few tiny meteors in the past, so it was gratifying to capture one while focused on such a small patch of sky. 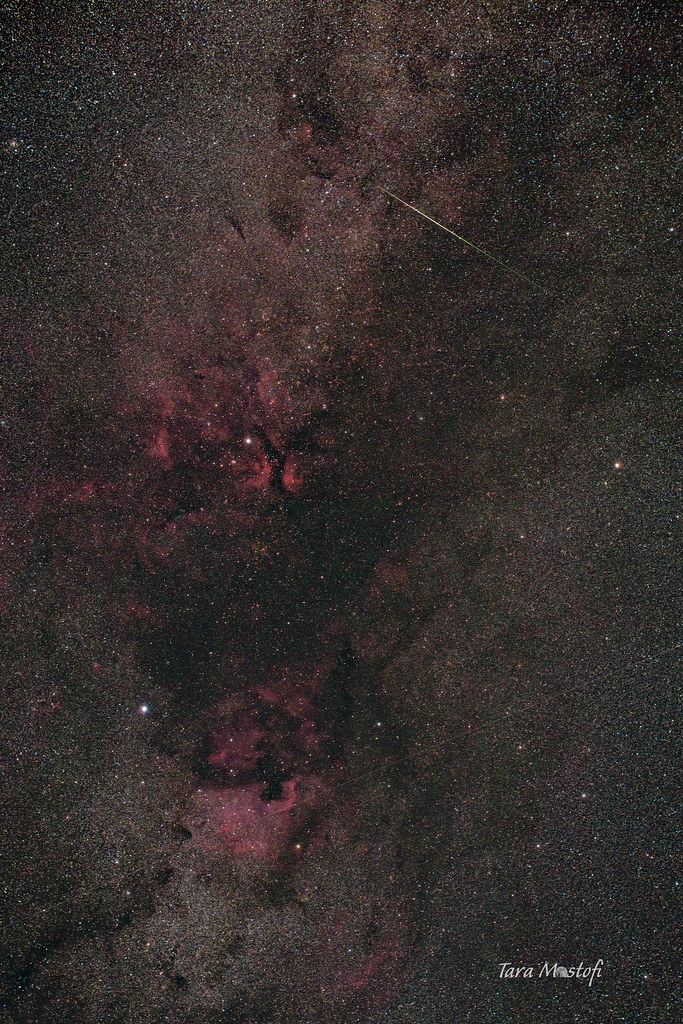 Thank you so much for your consideration
Tara Mostofi
Top 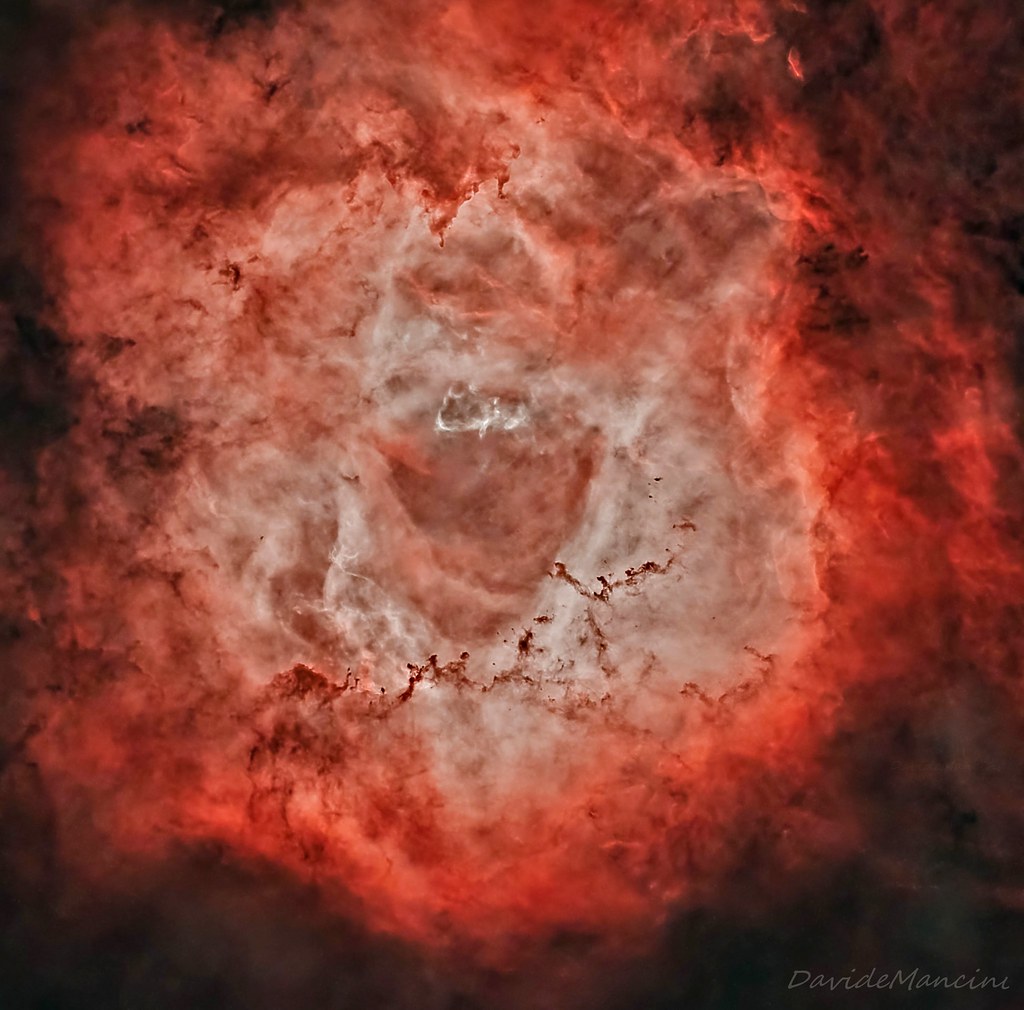 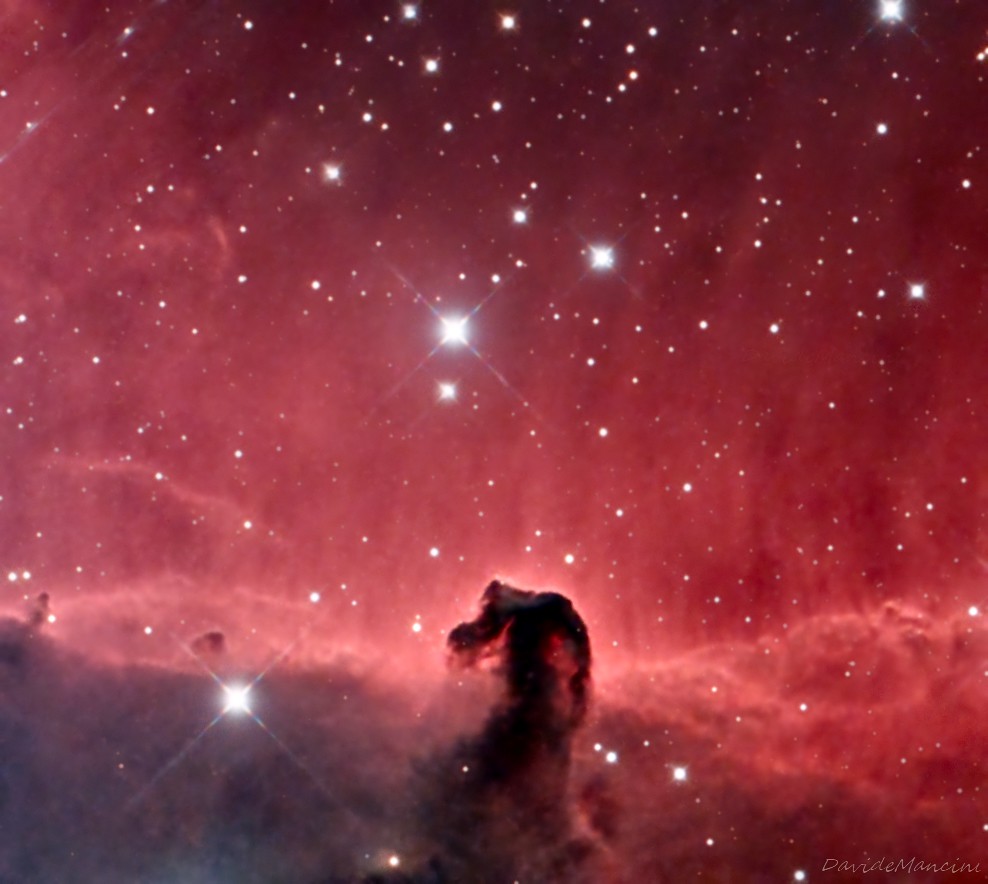 Sh2-101, at least in the field seen from Earth, is in close proximity to microquasar Cygnus X-1, site of one of the first suspected black holes. Cygnus X-1. The companion star of Cygnus X-1 is a spectral class O9.7 Iab supergiant with a mass of 21 solar masses and 20 times the radius of the Sun. The period of the binary system is 5.8 days and the pair is separated by 0.2 astronomical units. The black hole has a mass of 15 solar masses and a Schwarzschild radius of 45 km. A bowshock is created by a jet of energetic particles from the black hole as they interact with the interstellar medium can be seen as an arc (bluish) to the right of the "Tulip". 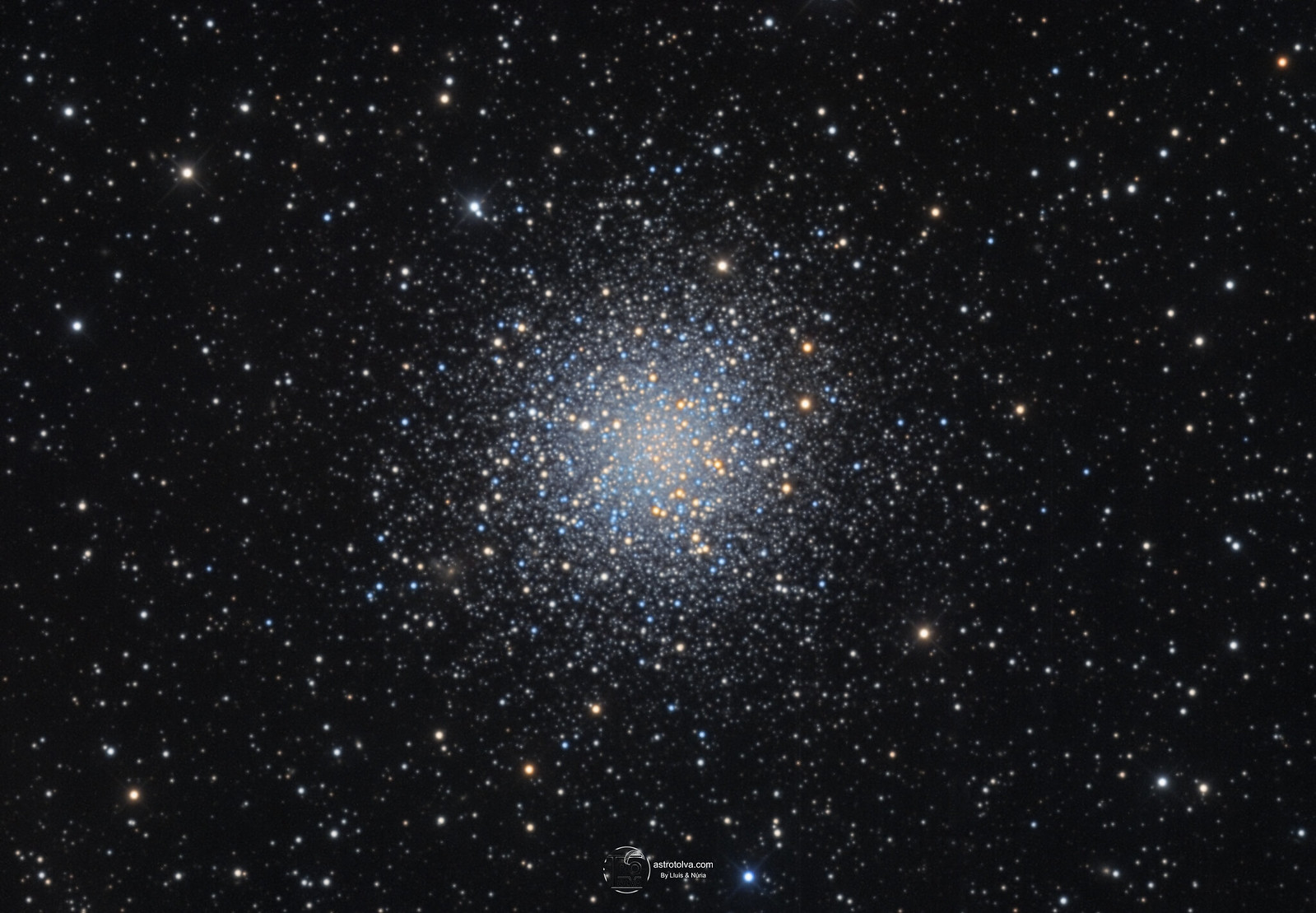 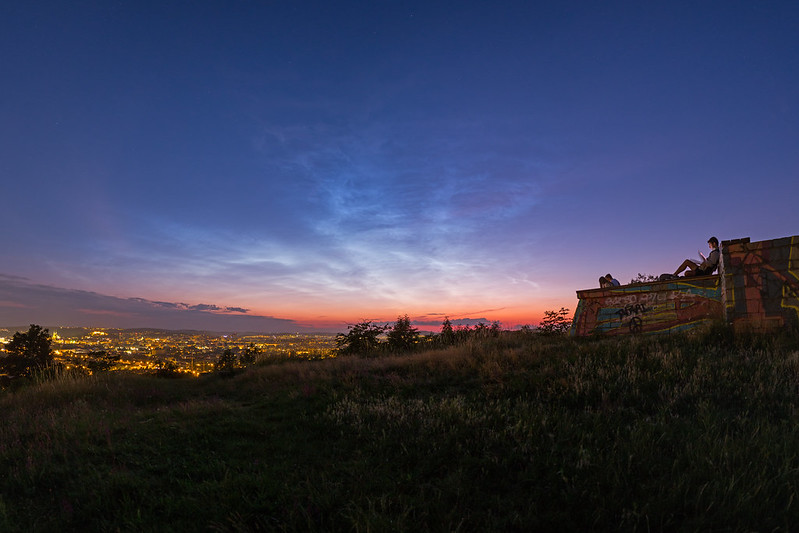 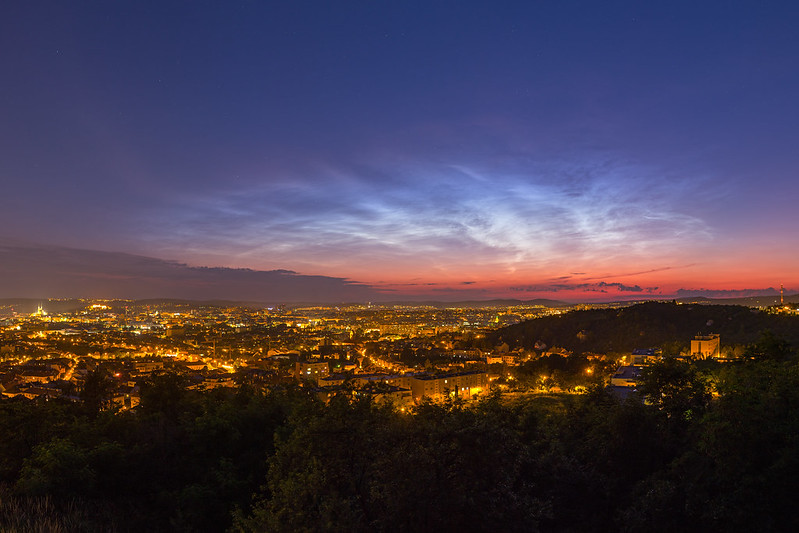 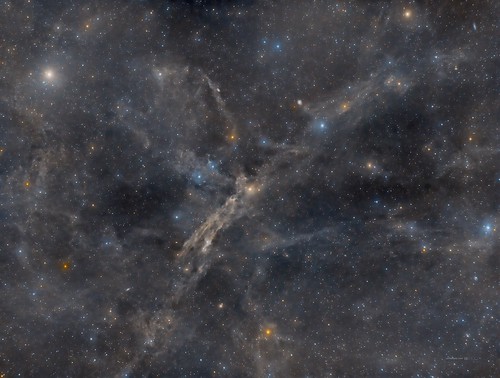 Mandel Wilson 2, Dust Angel or Angel nebula, is made up of Integrated Flux Nebula (IFN).
According to Steve Mandel-Wilson, IFN are "high galactic latitude nebulae ... illuminated not by a single star (as most nebulae in the plane of the Galaxy are) but by the energy from the integrated flux of all the stars in the Milky Way".

Meaning... the combined light of stars along the Milky Way are reflected by these cosmic dust clouds that soar some 300 light-years or so above the plane of our galaxy.

It's amazing what myriad of small galaxies are in the background of htis picture....
It's a extremelly faint nebula on a large wide field, on the same frame it's possible to alocate 50 full moons.....
astro.carballada.com
Top

Full info @ https://www.kinchastro.com/wr-134-in-cygnus.html
You do not have the required permissions to view the files attached to this post.
Top

https://www.astrobin.com/7oxzoj/D/
You do not have the required permissions to view the files attached to this post.
Top

I was playing around with HOO version of my WR134 image. Although I dislike putting forward "starless" images.....I thought this was quite interesting......and wanted to share. Takahashi FSQ130ED with ZWO ASI2600MM

See also: https://www.kinchastro.com/wr-134-in-cygnus.html
You do not have the required permissions to view the files attached to this post.
Top 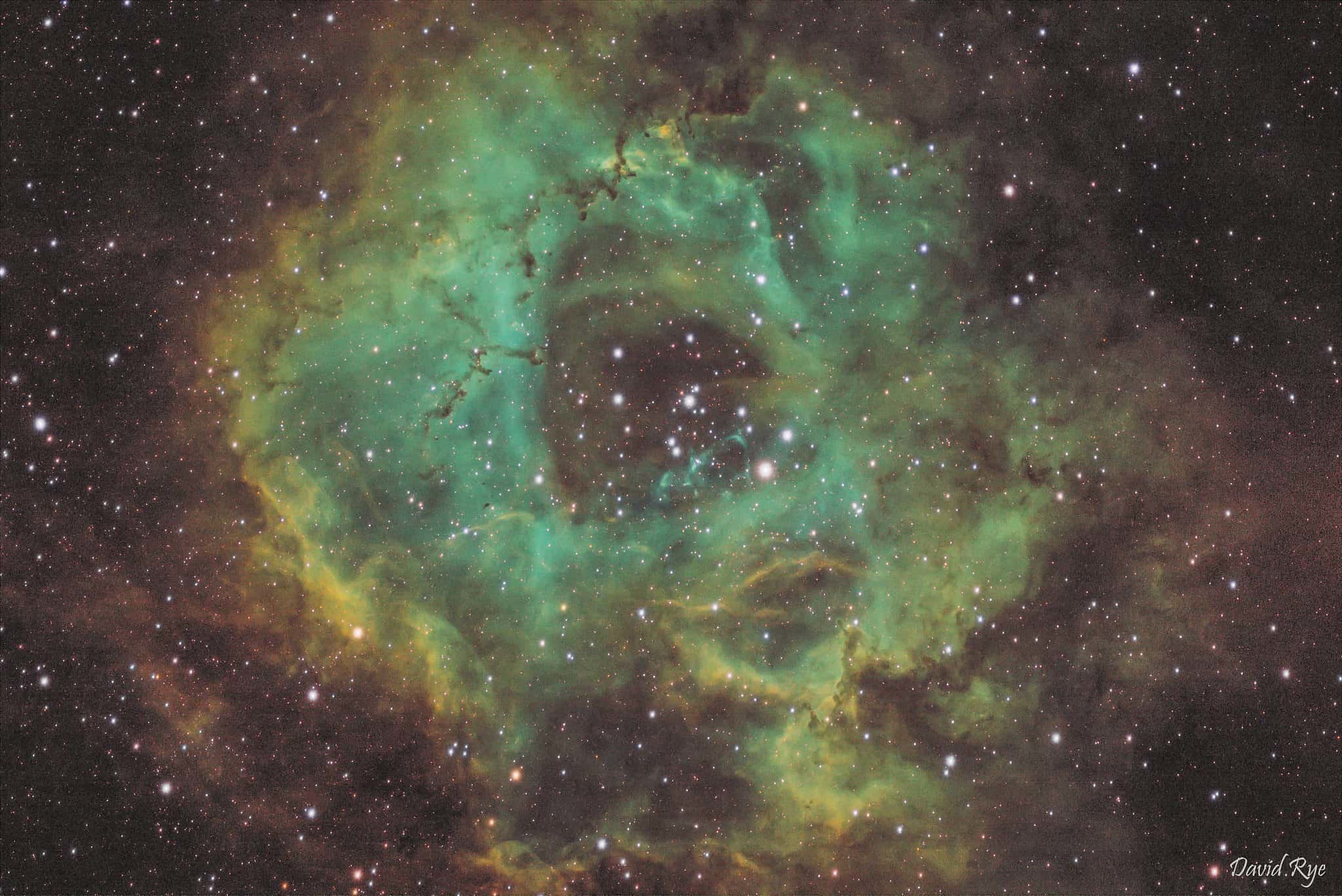 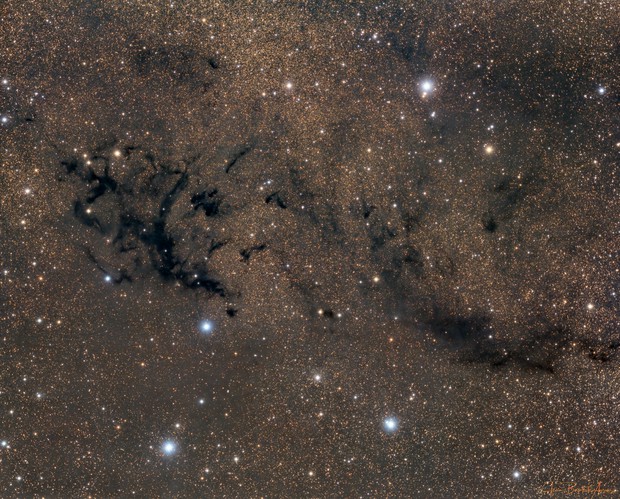 This area is located in the plane of the Milky Way, which is visible mostly in the background of the "Great Rift", a huge opaque band consisting mainly of dust and dihydrogen, which extends from the constellation Cygnus to the center of the galaxy in the constellation Sagittarius.

In fact, the stars visible behind this band of dust all seem "reddened", hence the general hue of the image.

The dark nebulosities LDN are still in the foreground and, much denser and more opaque than the dust of the great rift, they totally block the light of the stars in the background.

I thought it was about time I imaged the other Northern region of the Milky Way that contains Cygnus, The Swan or Northern Cross of the night sky. Also was nice to use my old D810! 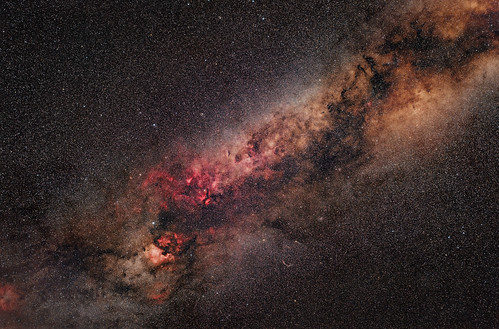 Swan of the Milky Way by Ahmed Waddah, on Flickr https://www.astrobin.com/0f6c6m/
You do not have the required permissions to view the files attached to this post.
Top 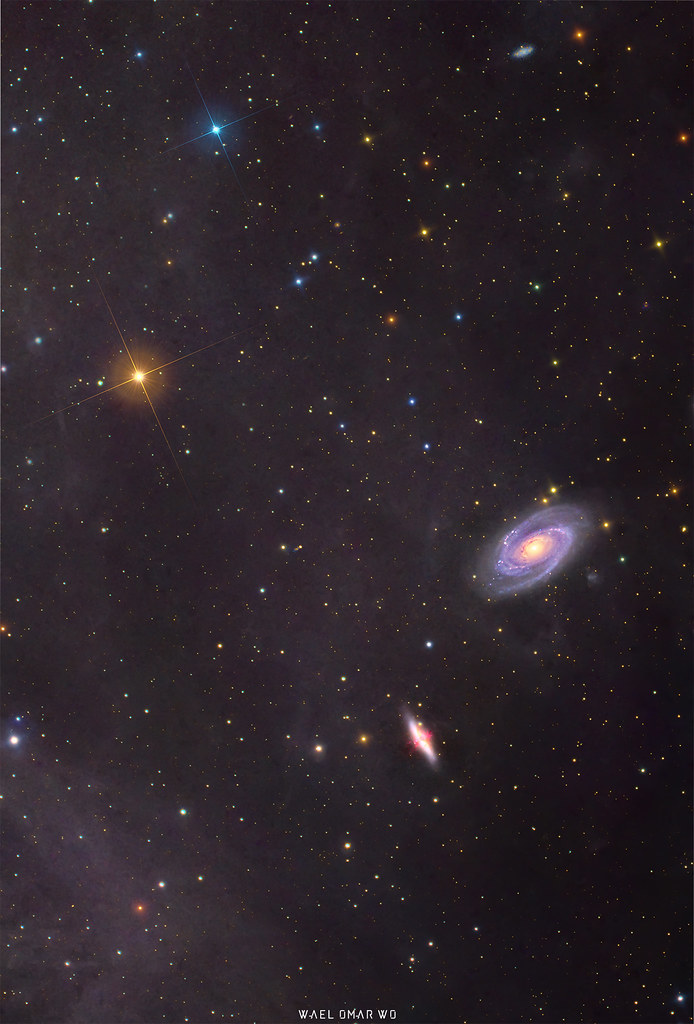 M81, also known as Bode's galaxy, is a large bright spiral galaxy located 11.8 million light-years away in the constellation of Ursa Major. It’s a grand design galaxy of diameter 90000 light years with active nucleus that has supermassive Black hole ( 70 million solar mass). It’s also reported that M81 may be the source of FRB 20200120E, a repeating fast radio burst. You can find it in the middle right of my image.

Next to its lower left is the M82 , also known “Cigar Galaxy”, it’s a star burst galaxy that undergo high rate of star formation which is triggered by interaction with the neighboring Bode’s galaxy. Tidal forces caused by gravity have deformed M82, a process that started about 100 million years ago. This interaction has caused star formation to increase tenfold compared to "normal" galaxies. The red spark in the middle of M81 represent the light from the glowing hydrogen filaments.

On the upper right you can see very small spot , its NGC 2976 , a peculiar dwarf galaxy .the galaxy's outer regions stopped making stars because the gas ran out. Now, the inner disk is almost out of gas as new stars burst to life, shrinking the star-formation region to a small area of about 5,000 light-years around the core. The very small blue dots in the galaxy are fledgling blue giant stars residing in the remaining active star-birth regions.

All over the image there is reddish brown interstellar dust known as IFN “Integrated flux nebula “. These nebula clouds are illuminated by energy from the integrated flux of all the stars , They are composed of dust particles, hydrogen and carbon monoxide and other elements.

The image is represented in HaLRGB , Total Exposure = 7 hrs and 10 minutes taken at Bortle 5 and Bortle 2 areas.

I use zwo 294 mm pro with Red Cat 51, the FOV is too wide for these galaxies but I tried my best to reveal their details as I could.

I created different crops to have different views of the objects included in my imaging session. 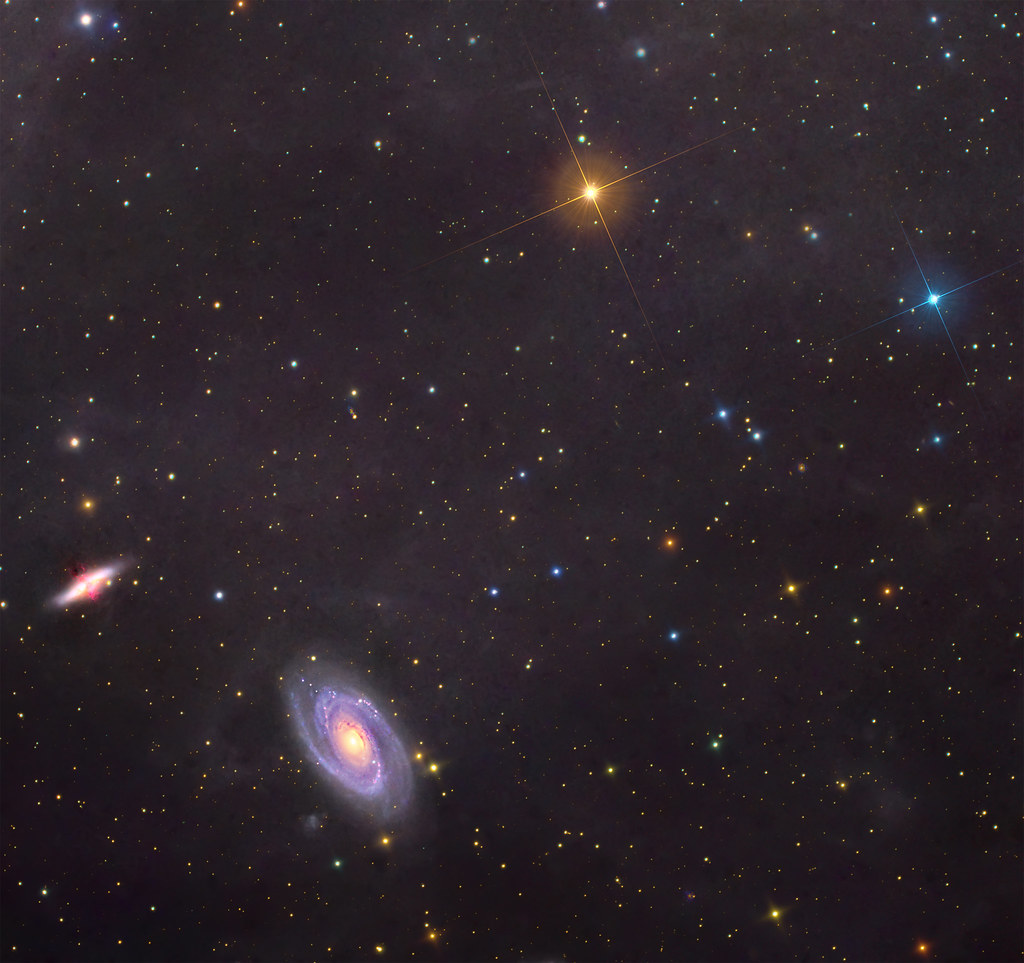 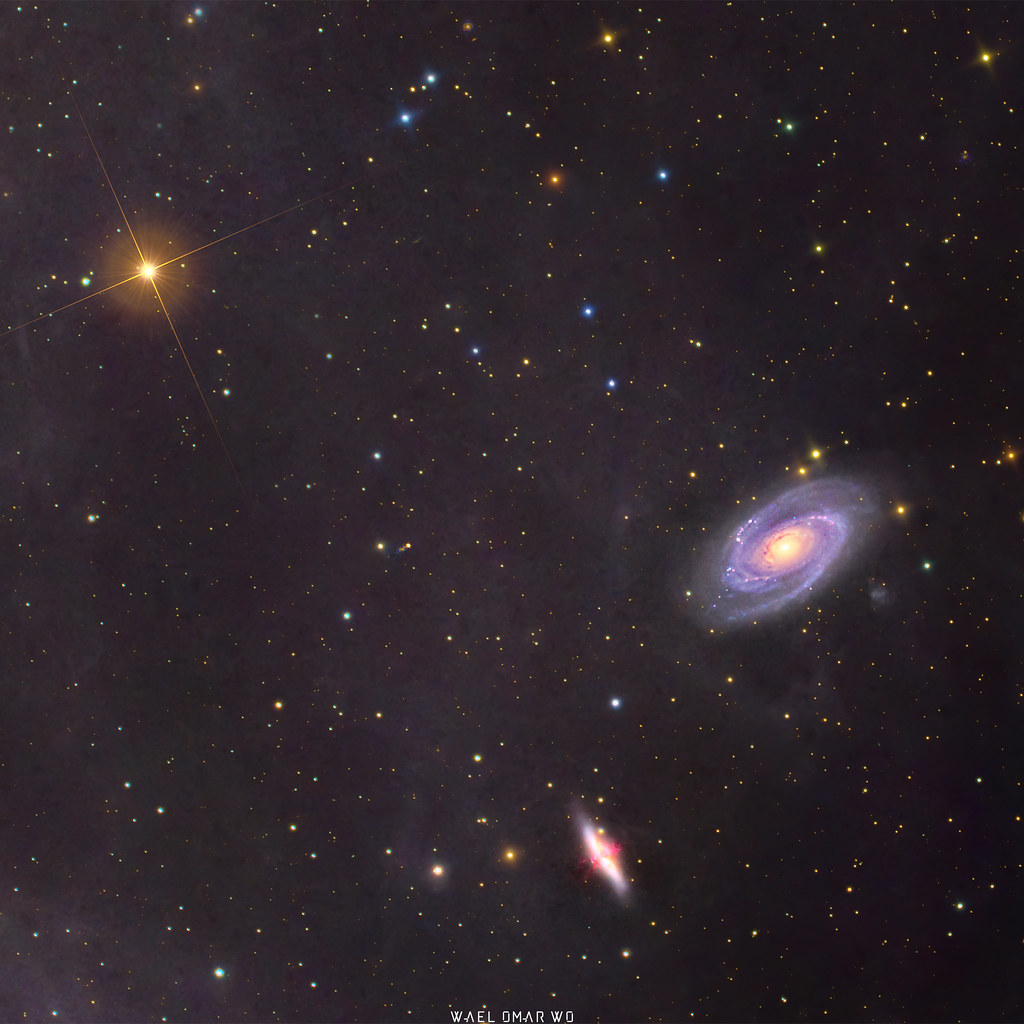 More info @ https://www.kinchastro.com/m20---trifid-nebula.html
You do not have the required permissions to view the files attached to this post.
Top

NGC 4631 (or Whale) is a spiral galaxy identifiable in the constellation of Canes Venatici and 30 million light years away from us. The characteristics of the bulge, positioned in a slightly off-center point (the yellowest area in the photograph), suggest a very intense and turbulent star formation area. A little further up we can observe the dwarf elliptical galaxy NGC 4627 which is also part of the NGC 4631 Group. For the realization of this photo I used a monochromatic camera in order to acquire the luminance (shape and details) and a color camera for chrominance.
Location: Taranto (Italy) Sky Bortle 6
Lights: 59x180s L-Bin1 + 32x180s RGB-Bin1
Total exposure: 4.55 h
Telescope: SkyWatcher 200/1000 PDS + GPU Coma Corrector
Guide: Takahashi FS60CB + PlayerOne Neptune C II + Astronomik Planet Pro 807nm
Camera: QHY 294 Pro Mono + Omegon veTEC 571C
Filters: Optolong LCCD + Optolong L-Pro
Mount: Skywatcher AZ-EQ6 GT
Processing: DeepSkyStacker, PixInsight, Photoshop CC
NGC4631-TommasoStellaWEB.jpg
You do not have the required permissions to view the files attached to this post.
Top 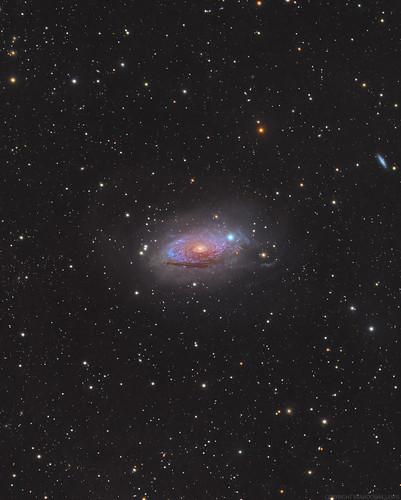 M63, also known as the Sunflower galaxy, is a spiral galaxy in the northern constellation of Canes Venatici with approximately 400 billion stars. M63 was first discovered by the French astronomer Pierre Méchain, then later verified by his colleague Charles Messier on June 14, 1779. There is a general lack of large-scale continuous spiral structure in visible light, so it is considered a flocculent galaxy. Although it only has two arms, many appear to be winding around its yellow core in this image captured from International Dark Site, Cherry Springs State Park. The arms shine with the radiation from recently formed blue stars and can be more clearly seen in infrared observations. By imaging flocculent spiral galaxies like M63, astronomers hope to gain a better understanding of how stars form in such systems.

This image was not part of my original imaging plan but circumstances required a redirect after some clouds interrupted southern imaging. However, though it was not part of the plan, I’m glad I decided to image this deep sky object. It’s been a couple years since I last imaged this beautiful galaxy and I shocked to find that after only 4 hours of total integration time, an incredible amount of IFN was revealed. 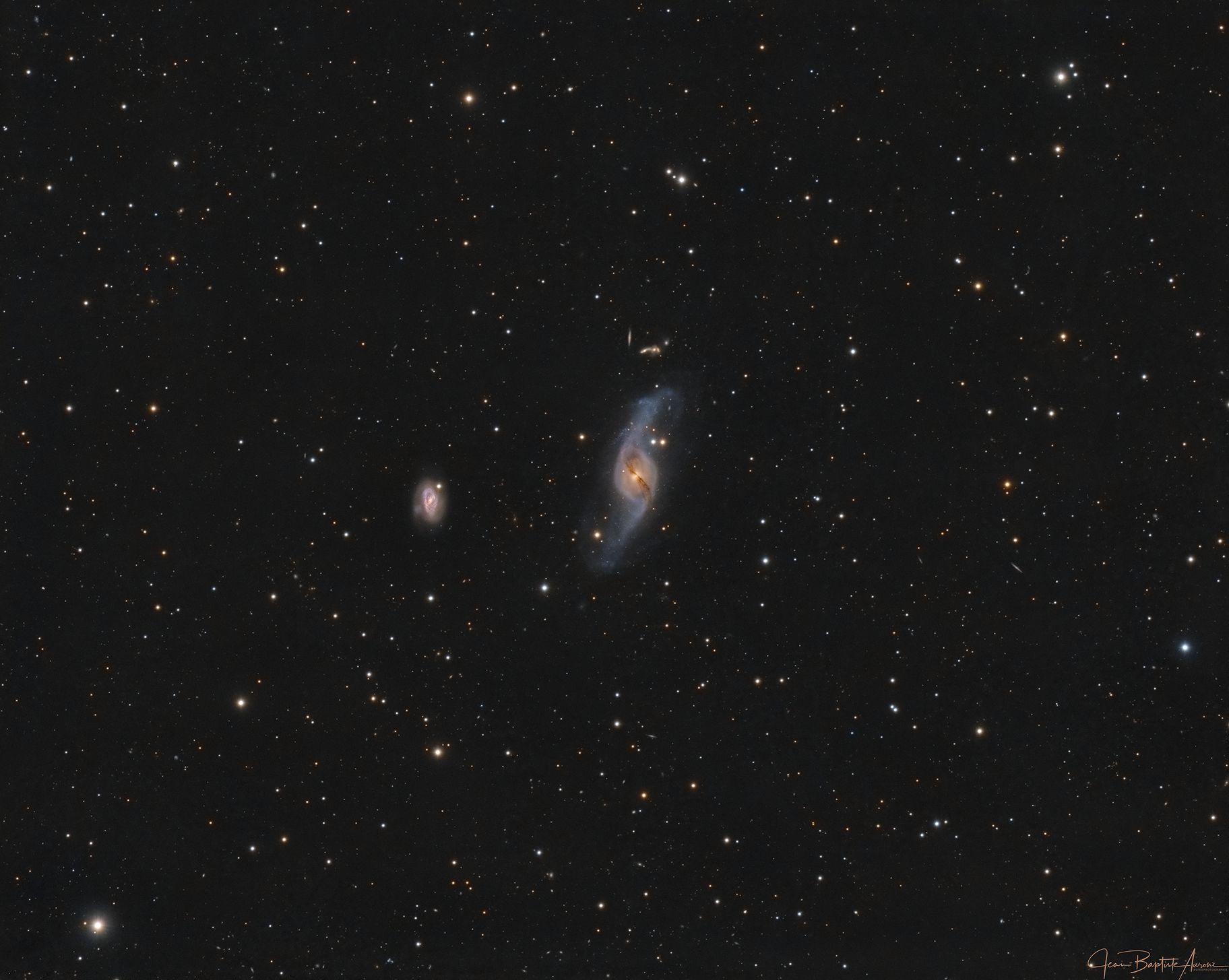 NGC 3718 is a barred spiral galaxy located in the Big Dipper constellation about 45 million light years from the Milky Way.

Active (Seyfert 1 type) and a LINER galaxy, NGC 3718 is also referenced in Arp's atlas of peculiar galaxies, in the class of galaxies with either irregular structures (irregularities), noticeable dust lines (absorption), or a granular appearance (resolution). NGC 3718 is in gravitational interaction with the nearby NGC 3729.