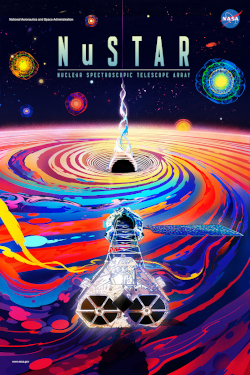 
The Nuclear Spectroscopic Telescope Array, or NuSTAR, was launched ten years ago on June 13, 2012. NuSTAR is the first satellite observatory to image the Universe in the high-energy X-ray band (from 3 keV to about 80 keV). This is a key energy range for understanding important astrophysical processes that shape the Universe, but was largely unexplored before NuSTAR since these X-ray photons have such high energy that they pass right through standard X-ray telescopes. By using specially-designed detectors and telescopes using multi-layer coatings, NuSTAR can focus X-rays in this energy band, producing images and measuring the energy distribution and variability of sources in this energy band as well. NuSTAR has a ten meter focal length, far too large to fit into available rocket fairings, so another special design feature is NuSTAR's deployable mast, which extended after NuSTAR was on-orbit to put the X-ray telescopes at the proper ten-meter separation from the detectors. Over its ten-year career, NuSTAR has taken a census of neutron stars and black holes of different sizes in crowded regions in the Milky Way and in other galaxies, has shown how supernovae synthesize and disperse complex atoms into space, and helped show how accreting supermassive black holes in extreme active galaxies power relativistic jets stretching for hundreds of thousands of lightyears into intergalactic space. The image above is a poster made in honor of NuSTAR's tenth birthday, suitable for framing, showing the twin X-ray telescopes pointing at the observer, the NuSTAR mast, and the instrument package and solar panel, with a stylized supermassive black hole sneaking up on NuSTAR from behind. One can only wonder at the new high-energy mysteries to be unveiled by NuSTAR over the next decade.