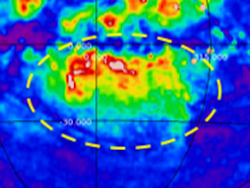 
X-ray observations provide essential information about the nature of the Universe - how complex atoms are created and distributed, how black holes are born and grow, how matter behaves at extremely high densities. But X-ray astronomy is hard, since X-ray observatories need to be placed above the earth's atmosphere, because earth's atmosphere blocks dangerous high-energy radiation from reaching the ground. And therefore space observatories are expensive, so, realistically, the number of free-flying X-ray satellite observatories is limited. Flying reusable X-ray detectors on less expensive sub-orbital sounding rockets provides an important way to make path-breaking observations and to test new technologies, like the X-ray Quantum Calorimeter, or XQC. The X-ray Quantum Calorimeter uses solid-state technology to provide some of the best measures of the X-ray fingerprints of atoms in outer space in gas at temperatures of millions of degrees or higher. XQC has been launched into space many times. Its latest launch was at 10:29 a.m. EDT on June 26, 2022, from the Arnhem Space Centre in Australia. The goal of this XQC flight was to study a region near the center of the Milky Way in order to determine what type of supernovae are responsible for producing the highest temperature X-ray emitting gas that fills the space between stars. The image above is an X-ray image (obtained by the ROSAT X-ray satellite observatory) of the X-ray sky in galactic coordinates. The disk of the Milky Way lies horizontally across the middle of the image, with the center of the Galaxy at the center of the image. The dashed region shows the outline of the area that XQC observed during this recent flight. XQC was carried aloft by a NASA Black Brant IX sounding rocket to an altitude of 203 miles. After a few minutes of science observations, the payload descended by parachute for recovery at the landing site. Data from the flight are now being analyzed by scientists at the University of Wisconsin-Madison and other institutes to help unlock the mysteries near the center of the Milky Way, and to help point the way to more detailed X-ray observations in the future.

So beautiful, exactly what I was looking for. Thank

Astrophysics isn't just a pretty face.
Know the quiet place within your heart and touch the rainbow of possibility; be
alive to the gentle breeze of communication, and please stop being such a jerk. — Garrison Keillor
Top
3 posts • Page 1 of 1