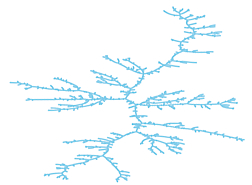 
Studying small objects at large distances is an incredible challenge, but that's what faces scientists who study neutron stars. Neutron stars are only just about 10 kilometers (6 miles) across, located at distances of quadrillions of kilometers or more. How can they even be found? Fortunately, neutron stars have ways of making their presence known. Many neutron stars have strong magnetic fields, and spin rapidly, so that the radiation generated near the magnetic poles pulses on and off as the neutron star spin. These pulses can reveal the neutron star as a compact, high density, fast-spinning, radio or X-ray pulsar. The pulse period makes neutron stars highly precise celestial clocks, useful for deep-space navigation and detection of gravitational waves from merging supermassive black holes and other massive objects. But the pulses are not precisely stable, since forces near the neutron star can slow down (or speed up) the star's rotation. These small changes in period actually provide scientists with important clues about the age of the neutron star, and can be used to classify pulsars, determine how they age and evolve, and ultimately provide a deeper understanding of the weird matter inside them. Researchers are continuously searching for news ways to understand the connections between the known neutron star pulsars and their fundamental properties. The image above is the "pulsar tree", an innovative way to explore pulsars based on a set of 8 intrinsic pulsar properties. Each branch of the tree separates pulsars into distinct groups with given properties, emphasizing the evolutionary connections in the known pulsar population. By climbing the pulsar tree, astrophysicists gain a clearer view of the connections between pulsar spin periods, period changes, pulsar ages, magnetic fields, compositions and other important properties.