CXC: Setting the Clock on a Stellar Explosion

CXC: Setting the Clock on a Stellar Explosion 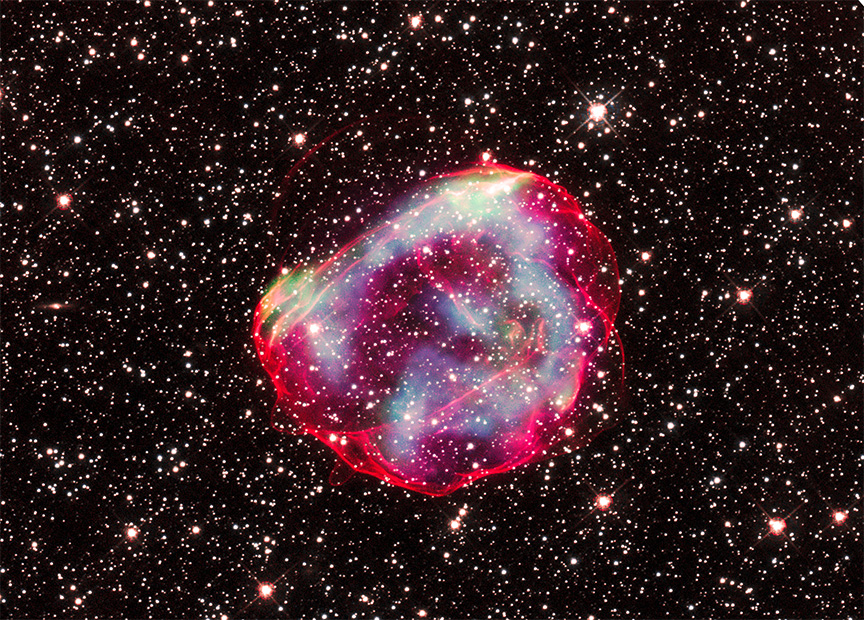 While astronomers have seen the debris from scores of exploded stars in the Milky Way and nearby galaxies, it is often difficult to determine the timeline of the star’s demise. By studying the spectacular remains of a supernova in a neighboring galaxy using NASA telescopes, a team of astronomers has found enough clues to help wind back the clock.

The supernova remnant called SNR 0519-69.0 (SNR 0519 for short) is the debris from an explosion of a white dwarf star. After reaching a critical mass, either by pulling matter from a companion star or merging with another white dwarf, the star underwent a thermonuclear explosion and was destroyed. Scientists use this type of supernova, called a Type Ia, for a wide range of scientific studies ranging from studies of thermonuclear explosions to measuring distances to galaxies across billions of light-years.

SNR 0519 is located in the Large Magellanic Cloud, a small galaxy 160,000 light-years from Earth. This composite image shows X-ray data from NASA’s Chandra X-ray Observatory and optical data from NASA’s Hubble Space Telescope. X-rays from SNR 0519 with low, medium and high energies are shown in green, blue, and purple respectively, with some of these colors overlapping to appear white. Optical data shows the perimeter of the remnant in red and stars around the remnant in white. ...


Evidence for a Dense, Inhomogeneous Circumstellar Medium
in the Type Ia SNR 0519-69.0 ~ Brian J. Williams et al
Know the quiet place within your heart and touch the rainbow of possibility; be
alive to the gentle breeze of communication, and please stop being such a jerk. — Garrison Keillor
Top
1 post • Page 1 of 1