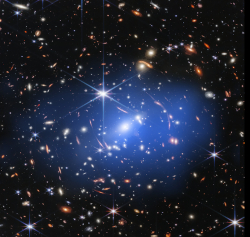 
Galaxy clusters are the fundamental building blocks of the cosmic web. Galaxy clusters form near enormous knots of dark matter, the strange stuff that holds the material Universe together (or at least, tries to). The gravity of these dark matter knots pulls together an enormous amount of "normal" matter, too, which eventually forms bright galaxies and stars which produce the electromagnetic radiation we can detect. The image above shows an early-release image from the James Webb Space Telescope of a galaxy cluster called SMACS 0723.3Ð7327. The JWST image shows, in red and white, infrared light from galaxies in the cluster (and also interloping foreground stars in the Milky Way). You can see a variety of galaxy shapes and sizes revealed by JWST. The X-ray image of the cluster, from the Chandra X-ray Observatory, shown in blue, looks quite different from the JWST image. Unlike the JWST image, which is dominated by the light from individual galaxies, the X-ray emission is produced by an extended cloud of very hot gas (tens of millions of degrees) trapped by the cluster's dark matter (with some contribution from supermassive black holes in individual cluster galaxies). This glowing X-ray cloud is made of up of an enormous mass of familiar, light-producing matter. The cloud contains so much matter that the amount of X-ray emitting "light" matter in it dwarfs the amount of "light" matter contained in the stars in the cluster galaxies. If you look close at the JWST image, you can see elongated, apparently curved galaxies which appear to bent around a point near the center of the X-ray emitting cloud. These weird objects are the images of individual background galaxies behind SMACS 0723, whose light is gravitationally lensed, i.e. bent and magnified by the warped spacetime produced by the cluster's gravity. Scientists use the amount of X-ray emission to estimate the amount of normal matter in the cluster, while the amount of gravitational lensing provides an estimate of the cluster's dark matter. 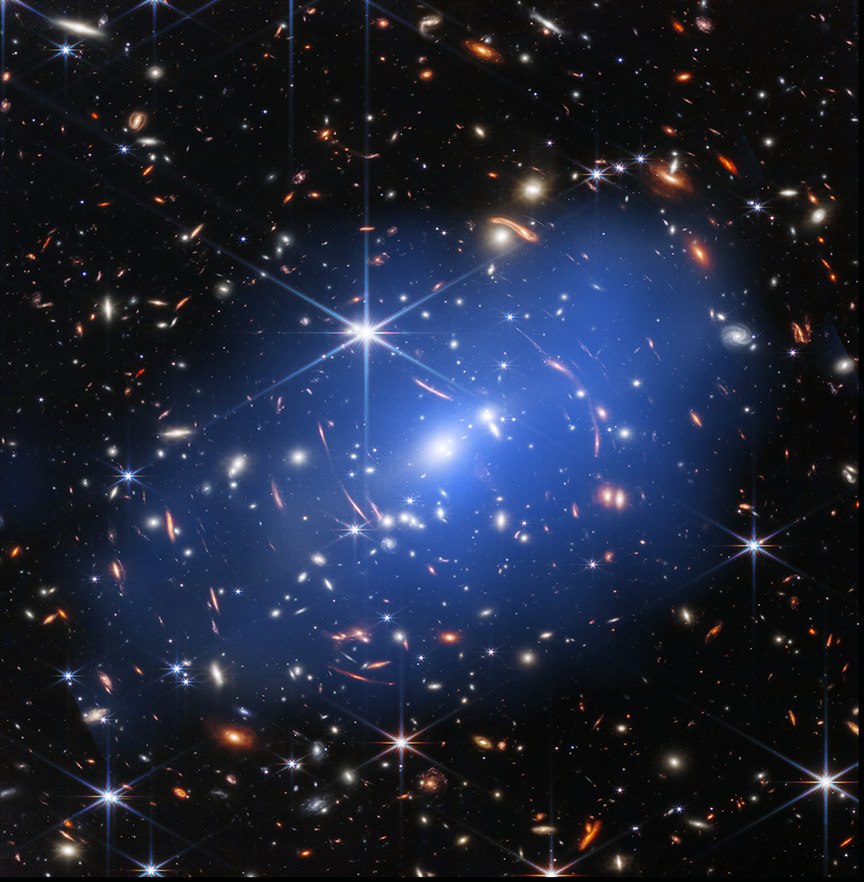 Webb data shows how the galaxy cluster SMACS J0723, located about 4.2 billion light-years away, contains hundreds of individual galaxies. Galaxy clusters, however, contain far more than their galaxies alone. As some of the largest structures in the universe, they are filled with vast reservoirs of superheated gas that is seen only in X-ray light. In this image, the Chandra data (blue) reveals gas with temperatures of tens of millions of degrees, possessing a total mass of about 100 trillion times that of the Sun, several times higher than the mass of all the galaxies in the cluster. Invisible dark matter makes up an even larger fraction of the total mass in the cluster.