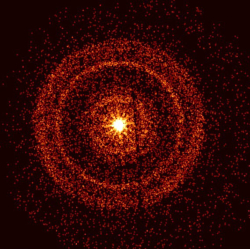 
On October 9, 2022, a cosmic explosion blasted earth with dangerous high-energy radiation. This blast came from a gamma-ray burst, the most powerful class of cosmic explosions. Astronomers believe that this gamma-ray burst was produced by the death of a star a few dozen times more massive than the Sun, which ran out of fuel and collapsed to a black hole nearly two billion years ago. The collapse of this star produced a tremendous outburst and powerful beam of high energy particles and radiation pointed, as it happened, right at our solar system. The image above is an image of the X-rays from the burst obtained by the X-ray Telescope on NASA's Neil Gehrels Swift space telescope, which, along with the Fermi Gamma-ray Space Telescope and the Wind spacecraft (whose primary purpose is to study the solar wind), were the first to detect this outpouring of dangerous energy and to sound the alarm. In the image, the burst itself is the bright X-ray source at the center (note that the spikes are instrumental artifacts). The strange rings in the image are echoes of the burst produced by large sheets of dust in our own galaxy. GRB 20221009a, as the burst is now known, was the brightest and closest gamma-ray burst we've yet seen, and offers a unique opportunity to understand the details of how stars die, and how black holes are born.