Black holes are like the trap doors of the Universe - mysterious passageways to some dark fate which may befall you if you don't watch your step. The nearest black hole to us is thought to be at a safe distance of about 1500 light years, but even so we're not quite confident that others may be much closer, lurking unseen to trap the unwary traveler, perhaps even colliding with our planet. We now know that a number of stars have wandered close to black holes and suffered unfortunate ends: first torn apart by the tidal pull of the black hole (a process known by the technical term, "spaghettification"), eventually swallowed by the black hole in an outburst of high energy radiation. Such outbursts are called tidal disruption events, and scientists have seen dozens over the past decade or so, aided by telescopic sky surveys specially designed to find things that go "blast" in the night. One such event was seen on February 14, 2022 by the Zwicky Transient Facility located at the storied Palomar Observatory, and was denoted AT 2022cmc by astronomers. Observations showed that this object lay at an enormous distance, about 27 billion lightyears from earth. This enormous distance, and the brightness of the event as seen from earth, meant that the power of this flash was almost unimaginable, equivalent to the power output of the all the stars in about 1 million galaxies. What could create such a brief, powerful outburst of radiation? Followup X-ray observations with NASA's NICER X-ray facility on the International Space Station and NASA's Swift observatory, and other instruments, showed that the AT 2022cmc burst likely originated in an extreme event: a star which wandered too close to a supermassive black hole, got torn apart, and formed a disk of matter around the black hole as it was slowly swallowed, producing a strong, particle beam jet which just happened to be pointed directly at earth. The image above is a frame from an animation of the remains of the shredded star being slowly accreted by the monster black hole, along with the newly-formed particle beam. 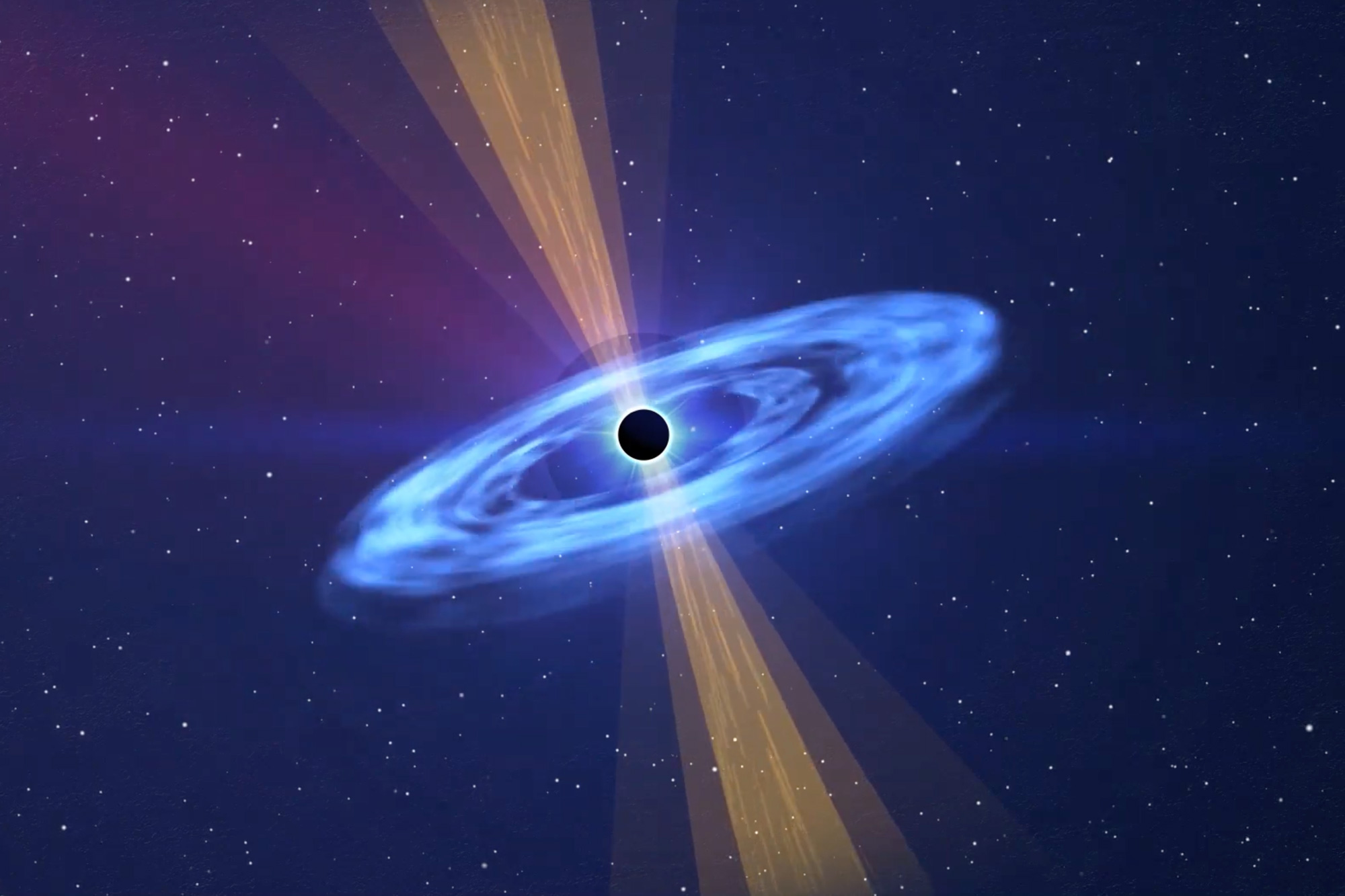 Earlier this year, astronomers were keeping tabs on data from the Zwicky Transient Facility, an all-sky survey based at the Palomar Observatory in California, when they detected an extraordinary flash in a part of the sky where no such light had been observed the night before. From a rough calculation, the flash appeared to give off more light than 1,000 trillion suns.

The team, led by researchers at NASA, Caltech, and elsewhere, posted their discovery to an astronomy newsletter, where the signal drew the attention of astronomers around the world, including scientists at MIT. Over the next few days, multiple telescopes focused in on the signal to gather more data across multiple wavelengths in the X-ray, ultraviolet, optical, and radio bands, to see what could possibly produce such an enormous amount of light.

Now, the MIT astronomers along with their collaborators have determined a likely source for the signal. In a study appearing today in Nature Astronomy, the scientists report that the signal, named AT 2022cmc, likely comes from a relativistic jet of matter streaking out from a supermassive black hole at close to the speed of light. They believe the jet is the product of a black hole that suddenly began devouring a nearby star, releasing a huge amount of energy in the process. ...


The Birth of a Relativistic Jet Following the Disruption of
a Star by a Cosmological Black Hole ~ Dheeraj R. Pasham et al
A Very Luminous Jet From the Disruption of a Star by a Massive Black Hole ~ Igor Andreoni et al
Know the quiet place within your heart and touch the rainbow of possibility; be
alive to the gentle breeze of communication, and please stop being such a jerk. — Garrison Keillor
Top
2 posts • Page 1 of 1